« Scott Rothstein to get booted from Broward voter rolls four years after conviction | Main | Yoo hoo, Gov. Scott? Veto this one over here! » 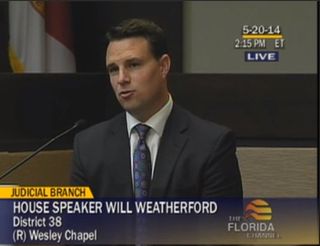 For the first time in state history, House Speaker Will Weatherford took the stand in the redistricting trial over the state's congressional districts Tuesday and defended the congressional map the Republican-controlled legislature drew. Story here.

Weatherford, R-Wesley Chapel, defended the map, and the decision to boost the black population in the meandering congressional district held by U.S. Rep Corrine Brown, D-Jacksonville. He acknowledged he never asked his staff to make the district more compact but supported the Senate version in a compromise that brought the number of black majority voters in the district over 50 percent.

The distict, which stretches through several counties, was first drawn by a federal court in 1996 to increase the odds of electing a black to Congress and has been a central objection in the now-pending lawsuit against the congressional districts drawn by the GOP-controlled legislature. Brown has held the seat since then.

Plaintiffs allege that Republicans sought the district and Brown, the incumbent, supported it because it helps to pack Democrats into a district in a way to make adjoining districts stronger for Republicans. The multi-county district became the foundation of the map that legislators ultimately approved in 2002 and again in 2012. The 2012 map came despite new constitutional guidelines approved in 2010 that Florida's districts be compact -- and not reduce minority representation.

Weatherford, who headed the House redistricting effort, testified on Tuesday that the compromise "made the map better" because it reduced the number of cities and counties that were divided. When pressed under questioning, he also said he never asked staff to try to make the Jacksonville-based minority district more compact.

"We relied heavily upon counsel and staff to make sure it was drawn in a legal manner,'' he said. It was the first time a sitting legislator has been called to testify in a pending lawsuit and the first on redistricting. The Florida Supreme Court ruled in December in a landmark decision that legislative privilege is secondary to the protections in the constitution, which prohibit legislators from redrawing maps with the intent of favoring for an incumbent or political party.

Plaintiff's lawyer David King pressed Weatherford: "You never gave your staff any direction to try to draw it in a more compact manner?"

Weatherford repeatedly avoided a direct answer: "I don't remember asking my staff to draw District 5, aside from asking them to draw in a way that was legally complaint."

Later, King asked about the seven proposed congressional maps and noted that none of them deviated from what King called the "serpentine district."

"We drew the best set of maps we thought we could,'' Weatherford said. "We wanted to give members as much opportunity to see the different methods in drawing a map but there is more than one way to draw legally compliant maps."

Weatherford said the final congressional map was a compromise agreed to between Weatherford and Senate President Don Gaetz, who led the Senate redistrictin effort.

"We knew and we believed that our map was superior to the Senate map, particularly as it relates to cities and counties splits,'' he said.