What used to be well-known only to political print reporters in Florida is now seeping into local TV news across the state: Rick Scott won’t directly answer questions about most topics of the day.

The most-recent example: Gay marriage and the decision Thursday by a Florida Keys judge to declare the 2008 voter-approved same-sex marriage ban unconstitutional. On Friday at two events, the governor wouldn’t really say what he thought of the ruling or Florida Attorney Pam Bondi's appeal.

“Nobody wants discrimination in our state,” Scott said in Bonita Springs, adding that he believes “in traditional marriage” and citizens’ access to the courts.

Gay-rights groups say the same-sex marriage ban discriminates against them, but the ban’s backers say their votes are being discriminated against by judicial activism.

So what discrimination is Scott against? Scott won’t say.

“Aren’t you trying to have it both ways?” WPLG’s Michael Putney asked Scott Friday in Miami.

“People have different view about it our state,” Scott replied. “But in 2008, the voters decided that this state would be a traditional marriage state. It’s going through the court system. But what’s important to me is I don’t want anybody discriminated against.”

Putney: Aren’t gays being discriminated against?

Scott: “I’m against any discrimination. But in 2008, the voters decided this would be a traditional marriage state.”

Putney: “Well, congratulations on these numbers.”

And congratulations on reinventing history, governor.

It’s questionable to say “a lot of people” questioned Scott’s 700,000 jobs plan as he currently frames it now. And that’s because Scott has flip-flopped on his job-creation math.

In July 2010, Scott promised the state would create 700,000 private-sector jobs in seven years. And that was on top of projected job growth. Then, after he won office, Scott reversed himself and said he would count every new private-sector job toward his 700,000 job promise and that it would not be on top of economists’ projections. Oh, and he also falsely claimed he never promised the new jobs would be on top of the old jobs.

What would Scott’s job-creation plan look like if benchmarked to his July 2010 promise?

In July 2010, Florida economists projected the state would have about 7.826 million non-agricultural seasonally adjusted jobs for the state fiscal year that ended at the end of last month. On Friday, the state announced 7.8 million.

So, by that estimate, Florida under Scott has produced 26,000 fewer jobs than estimated.

However, there are other forecasts. State economists adjusted their projections downward for months amid the recession and its aftermath. In February 2011, a month after Scott took office, they projected Florida would have about 7.690 million jobs at the end of last budget year.

By that standard, Scott is 61,000 jobs above estimate.

To be clear: the state economic projections were just that – projections – and that they included private-sector as well as public-sector job estimates (the former of which Scott pegs his plan to and for which he never released detailed data in 2010).

Historically, private-sector jobs account for 85 percent of the total jobs number in these estimates. So by applying that historical percentage to the previous state economic forecasts, the above-forecast private-sector jobs created under Scott range between 69,000 and 144,000, depending on whether you apply the July 2011 or the February 2011 estimates.

Obviously, different benchmarks yield different results. And there’s an argument to be made that job-growth analyses for Scott should start when he actually signs his first batch of laws and the state budget that institute his policies, which would be July 1, 2011 (using the economic estimate from two months later, the private-sector jobs created under Scott that are above estimate likely stand at 360,000). 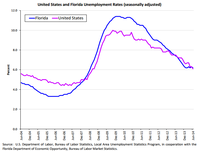 There’s also the fact that Florida is heavily dependent on the national economy, over which any governor has little say. The enclosed graph in this blog, from a press release issued by Scott's economic department, clearly shows a relationship between state and federal unemployment rates.

Regardless of how the data are sliced and diced, the bottom-line figures remain good for Scott and bad for Democrat Charlie Crist. Since taking office, private-sector and total nonfarm seasonally adjusted jobs have respectively grown by about 621,000 and 599,000 under Scott and they shrunk by about 820,000 and 838,000 under Crist.

All those numbers aren’t the grist for compelling TV (or really newspaper print stories). And for Scott he won one and lost one after Putney asked his questions for WPLG.

But in another report that aired on WPLG, Scott’s refusal to answer Putney reinforced the growing narrative that Scott just won’t level with reporters. The Florida Democratic Party posted that clip on YouTube with the headline “Rick Scott Won't Say Where He Stands on Marriage Equality.”

Steve Bousquet, a bureau chief in the joint Tampa Bay Times/Miami Herald bureau, noted how Scott’s evasions – from climate change to a controversy over using on-duty cops at a campaign event -- have made it to national cable news.

And then political reporter Craig Patrick at Fox 13 in Tampa followed up with a tough report that the liberal group American Bridge featured on YouTube with the headline: “Rick Scott's Question Dodging Nothing New to Florida Press.”

Indeed, in 2010 when he was running for office, Scott refused to talk about sitting down for a deposition in a court case involving his private business. Scott was perhaps the most-deposed candidate for governor in Florida history, and the depositions shed light on his refusal to go off message. In one of many similar exchanges, for instance, he said he didn't know the definition of "agreement."

But none of it seems to make much of a difference so far. Scott has a story he wants to tell about jobs. And he’s sticking to it.

But sometimes, as Patrick's report shows, it's painful to watch.