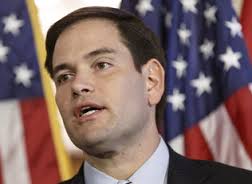 Sen. Marco Rubio this afternoon said he supports the use of medical marijuana but only the noneuphoric type approved by the Florida Legislature.

"If there are medicinal uses of marijuana that don't have the elements that are mind-altering or create the high but do alleviate whatever condition it may be they are trying to alleviate, that is something I would be open to," he said.

His comments came in a wide-ranging interview with reporters, and the Florida Republican made clear he was limiting support to noneuphoric strains such as "Charlotte's Web."

Rubio called the ballot initiative before voters this November a "ruse" that could allow people with dubious medical needs to get access to the high-inducing form of the drug.

"You've seen how this has been abused in many parts of this country. It's the reality that there are states now that you go in and can have a doctor write you a prescription for something that you are really just using for purposes of acquiring legally a recreational drug."

In January, when first asked about the ballot initiative, Rubio said: “You hear compelling stories of people who say the use of medicinal marijuana  provides relief for the thing they are suffering. So I'd like to learn more about that aspect of it, the science of it. I have qualms about that proposal, I really do, but I probably need to learn more about it. The broader issue of whether we should be legalizing it is something I'm pretty firm about. I don’t think legalizing marijuana or even decriminalizing it is the right decision for our country."

Rubio's opposition goes against growing public support in Florida. A poll released this week showed 88 percent of Florida voters now would allow use of marijuana for medical purposes, up from 82 percent support that Quinnipiac reported in November.
About 55 percent of Floridians would legalize marijuana for recreational use, the poll reported — up 7 percent from November. More on that here.

Democratic Sen. Bill Nelson has said he supports the ballot initiative. "Just listen to the personal testimonies of people that nothing will help them as they are dying and marijuana gives them comfort and relieves the pain," he told the Tampa Bay Times recently.