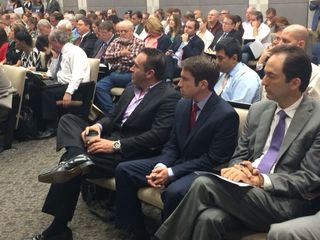 The Betty Easley Conference Center was packed with a Who's Who of Tallahassee lobbyists Monday. Each of them were scouting out prospects at the Department of Health hearing on the rule that will be the template for Florida's foray into medical marijuana.

Many of those in attendance Monday had not registered yet as executive branch lobbyists. In fact, there is still no category for the "marijuana" industry in the Legislature's lobbyists registry.

But it's a growing industry, literally, and the lobbyists crowded the room -creating a standing room only scene at what is normally a dull rules hearing.

In the audience was Louis Rotundo and Ron Watson ofthe Florida Medical Cannibis Association. Jeff Sharkey and Taylor Biehl of the Medical Marijuana Business Association of Florida came with their prospective investors too. Clark Smith attended for the contingent of nine lobbyists hired at Southern Strategies by the perceived giant in the industry, Miami-based Costa Farms.

It's not clear where some lobbyists are affiliated. Jorge Chamizo, Dave Roberts, Ron Greenstein and Doug Mannheimer were working but none seem to be registered yet. Steve Schale and Jon Costello are registered for Sanctuary Cannabis, a Weston-based company seeking to develop the product in the Southeast region. John Lockwood is working for MJardin Management, a cannabis grower. Susan Goldstein is working for another Broward-based company, Innovative industries of Pompano.

Justin Sayfie said he has a few prospects he's working on but nothing firm. Jon Moyle represents the Stanley Brothers, who developed the trademarked "Charlotte's Web" in Colorado, and the family working closely with bringing the strain to Florida, Peyton and Holly Moseley of Pensacola.

Even Rep. Doug Holder, R-Sarasota, who is term limited out of office in November, appeared to be scouting out prospects as he roamed in and out of the hearing room Monday with a legal pad of notes. (State law prohibits former legislators from lobbying the legislature for two years but can freely lobby state agencies and other elements of the executive branch.)

Holder said he was in town "just clearing out my office'' but decided to come by. "My constituents have lots of questions,'' he said.