As Republicans battle to take Senate, Rubio throws his support behind three candidates in tight races 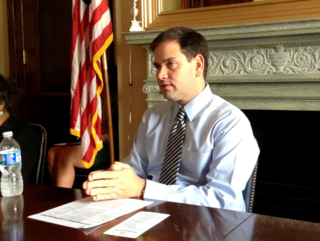 Don’t let anybody say Marco Rubio doesn’t like a challenge.

The Florida Republican senator, who doesn’t have his own race to worry about this year (let’s leave aside that whole presidential thing) said he’s all-in for three Republican Senate challengers.

And in all three cases, the pick Rubio is supporting is in the tightest of races.

“I’m supporting every Republican challenger, but we’re focused on three races right now,” Rubio said in a roundtable discussion with several reporters last week. “And I’m focused on them not simply because I like these candidates personally, but because I believe they are the kinds of leaders that will support much of the 21st Century reform agenda that we are pushing.”

While Democrats now control the Senate, their margin is slim and Republicans are in a strong position to win the chamber this November. Political number-cruncher Nate Silver this week said Republicans remain slightly favored to take control of the Senate.

The three candidates Rubio is backing are right in the thick of that. RealClearPolitics, which monitors a range of political polls, lists all three as toss-ups.

In Arkansas, current Republican Rep. Tom Cotton is looking to unseat sitting Democratic Sen. Mark Pryor. The RealClearPolitics average of polls gives Cotton a 3 percentage point lead, although Pryor had the edge in polls this Spring.

In Colorado, current Republican Rep. Cory Gardner is looking to unseat sitting Democratic Sen. Mark Udall. The Democrat there has a 1.5 percentage point lead, according to the RealClearPolitics average.

With some last-minute help from Rubio, Ernst came from behind to win her Republican primary. Rubio was in Iowa again this past weekend, helping Ernst.

Her uniqueness as a candidate, Rubio said last week, is “one of the reasons why we kind of made an exception to our no-primary rule and got in involved in her race in the primary – because of how much we believed in her as a candidate.”