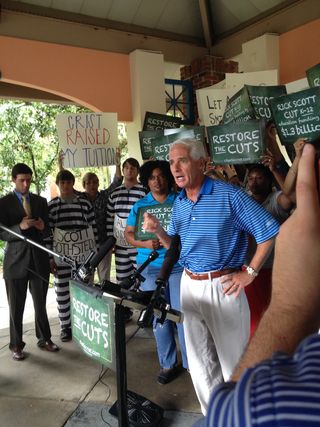 Democratic candidate for governor Charlie Crist kicked off his "Restore the Cuts" school bus tour in a Tallahassee park on Wednesday.

Crist arrived at the park about 20 minutes later, accompanied by his running mate Annette Taddeo and his wife Carole Crist. He was greeted by a dozen Leon County schoolteachers chanting his name.

Crist stepped up to the podium, flanked by supporters holding campaign signs. The Scott supporters crowded behind them with signs of their own.

Included in the fray: Kim McDougal, a top educator policy advisor on leave from Scott's office. She carried a sign that said, "CRIST RAISED MY TUITION."

Crist slammed Scott for cutting $1.3 billion from public schools in his first year in office, and was equally as critical of cuts to the Bright Futures scholarship program.

"We don’t have a revenue problem," Crist said. "We have a priority problem. The priority needs to be education."

Taddeo also spoke, recounting how a teacher had inspired her to go to college and pursue a career in business and politics.

The bus then took off for Jacksonville.

Crist is scheduled to make additional stops in Orlando, Tampa and Miami over the next two days.