Democratic candidate for governor Charlie Crist and his team are in Lake Buena Vista this morning, preparing for the second day of their statewide bus tour.

The (fitting) mode of transportation: a yellow school bus.

Crist has been hammering incumbent Republican Gov. Rick Scott for cutting $1.3 billion from the state education budget during his first year in office. Crist has also been pressing to make education the focus of the 2014 gubernatorial race.

The tour kicked off in Tallahassee on Wednesday, and after nearly stalling on the side of the road in torrential rains, made a second stop in Jacksonville.

"What I want to do is support someone who will restore the cuts here in education," she said.

"We ought to be restoring the truth because he's not leveling with the people of Florida," said Thrasher, who was joined by the Republican Party of Florida's Susan Hepworth. "Gov. Scott and the Republican legislature have put over $2 billion back into education."

The next stop: a Total Wine in Jacksonville, where a dozen supporters had set up a phone bank.

The volunteers were more than a little surprised to see Crist.

"You are the answer to my prayers," said Marie Fitzsimmons, a retired substitute teacher.

Fitzsimmons then took Crist's wife Carole by both hands. "You are the luckiest woman in the world," she said.

The bus departed for Orlando later in the evening. Events are scheduled Thursday in Orlando and Tampa.

You'll find some scenes from the road below. 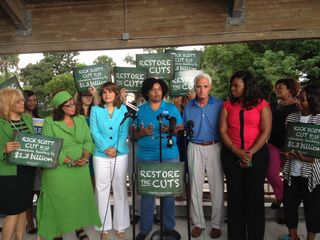 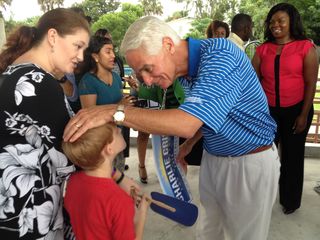 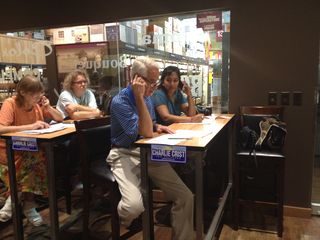 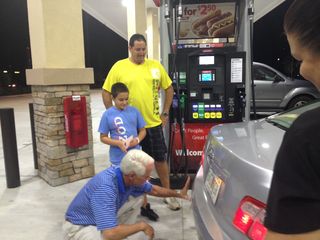