« Thurston's supporters keep pushing Sheldon to bow out | Main | Miami-Dade mayor to feds: You may need to help us with surge of unaccompanied immigrant children » 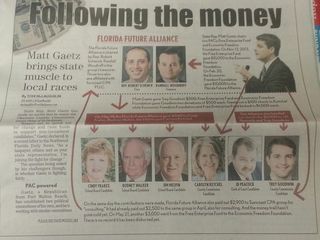 It’s not often that Democrats and Republicans can agree to much of anything.

Which is why what happened Friday at a news conference in Okaloosa County is sorta noteworthy.

Prompted by a Northwest Florida Daily News story about Rep. Matt Gaetz’s use of PACs to influence local races, John Whitley, a state committeeman of Okaloosa County for the Florida Democratic Party, and Gaye Ellis, the chairwoman of the Okaloosa County Republican Executive Committee, reached agreement on Friday that there’s too much outside money sloshing around local races.

“The Northwest Florida Daily News has focused on a Tallahassee PAC which has local ties, but there are other PACs influencing our local election with no local ties at all," Ellis said. "This outside influence puts a damper on the phrase: ‘We the people.' The people of Okaloosa County have the ability to govern themselves.”

“It appears our state legislators are bringing the nasty, deceitful, and misrepresented, misleading and false statements of the federal and state level politics to our homefront,” said Whitley.

Although no names were mentioned at the news conference, Whitley was asked who he was talking about, and said it was Gaetz, who is the focus of the Daily News story:

Gaetz has established two political committees of his own, and he's working with similar committees and groups across the state to accumulate large amounts of money.

The dollars have thus far flowed from the committees into the campaign funds of selected local candidates, but history shows committee funds can also go toward political advertisements that can't be tied to a particular person.

District 4 County Commission prospect Trey Goodwin is one of the local candidates on the receiving end of Gaetz’s fund raising efforts. He makes no apologies for that.

"Nobody is buying me by contributing to my campaign," he said. "I make that clear. I'm asking them to buy into my vision."

The Florida Division of Elections lists Gaetz as the chairman of both.

Whitley said outside money from PACs like Gaetz are worse than ever before and heavily influencing the outcome of local races like school board, county commission and county clerk.

“We’re tired of having our elections decided for us by people who couldn’t locate Okaloosa County on a map,” Whitley said.

Why didn’t he mention Gaetz during the news conference?

“I’m not naming names because it’s so obvious,” he said.

Here's the video of the news conference: