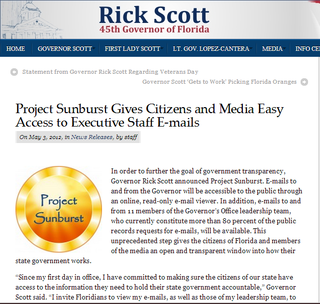 Internet giants Google and Yahoo must disclose who established several email accounts held by Gov. Rick Scott and his current and former employees as part of a lawsuit pending in Tallahassee that claims the governor routinely circumvented the state’s open records law, a court ruled Wednesday.
Tallahassee Circuit Court Judge Charles A. Francis ordered the companies to respond to a limited request by lawyer Steven R. Andrews to explain who created the Gmail and Yahoo accounts and when they were established.
The governor’s lawyers did not deny the existence of the accounts but called the exercise a “fishing expedition” because the email accounts used by senior staff and the governor are private and not used for public business.
Andrews argued that there is no way to verify whether the email accounts did not contain government business unless the court knows who created them and the owners of the accounts are put under oath. Andrews is suing is Scott and Attorney General Pam Bondi over whether they hid records related to a dispute between him and the governor's office over property the governor wanted to buy to create a legacy park.
Andrews has produced evidence that Scott and his staff have used the Google and Yahoo accounts to conduct some government business but, when asked to produce the documents, the governor’s office replied that "no responsive records were located." Florida law requires emails used for state business to be retained and not destroyed.
Frank Collins, spokesman for Scott, would not comment on the policy that allows employees to use private email accounts to conduct state business, but instead criticized Andrews.
"Steve Andrews has a personal grudge against state government and no shortage of time to file lawsuits  as a trial lawyer representing himself,'' Collins said. "We are confident the courts will ultimately throw out his baseless arguments and personal attacks."
Scott made headlines in 2012 when he promoted "Project Sunburst" a state-run website that would post all emails to and from the governor and his top staff "to  further the goal of government transparency."
Critics warned that the move would force the real communications on executive issues underground and, Andrews alleges, the result has been a routine use of Gmail accounts and text message between the governor's top staff and in others, including legislators and lobbyists.
Andrews produced a document that shows that Scott has used at least one account, gov.rls@gmail.com, to discuss public business outside of the sunshine. In 2013, Scott forwarded an email sent to him on the Gmail account from his former chief of staff, Steve MacNamara, to his public Sunburst account in which MacNamara urged the governor to consider Sen. John Thrasher as his lieutenant governor.
"Given all he has done, I hope you at least put him on the short list, have Adam tell him he's not it so he can gracefully withdraw saying he needs to keep his commitment to his constituents and fill out his term,'' wrote MacNamara, who has also served as Thrasher's chief of staff and is now working to help Thrasher become president of Florida State University.
The email, first discovered by Associated Press reporter Gary Fineout, was written in March, shortly after former Lieutenant Gov. Jennifer Carroll was forced to resign. It appeared on Sunburst in May 2013.
Andrews also found a January 2012 text message from the governor's former deputy chief of staff, Carrie O'Rourke, to former Department of Education Secretary Gerald Robinson, stating: "Gov just shot me an email that you called. Did you need more clarification from our end?"
When Andrews asked the governor's office to produce all email correspondence generated by the governor regarding state business from the Gmail account, including these, the governor's public record's office said "no responsive records were located."
Andrews also found evidence that members of the executive office staff have forwarded documents to eogfl@yahoo.com and he found that several members of the executive staff routinely used Gmail accounts to conduct state business. In addition to the former lieutenant governor, First Lady Ann Scott, and her former aide, Sarah Hansford, used Gmail accounts to communicate. O'Rourke and other members of the governor's staff also were found to use Gmail accounts.
Andrews said he believes the accounts were opened when staff "went to work for the executive office of the governor, and they were instructed to routinely use these accounts." He claims that email chains indicate that the governor's office used staff members, whose emails were not published on the Sunburst system, as surrogates to handle communications between the governor and others.

In addition to the former lieutenant governor, First Lady Ann Scott, and her former aide, Sarah Hansford, used Gmail to communicate. O’Rourke and other members of the governor’s staff also used Gmail accounts for state business, records in the case show.

Scott spokesman John Tupps said the governor's office discourages employees from using private accounts for text messages and must forward any correspondence from private email accounts to their state emails if they relate to state business.

Thomas Bishop, a Jacksonville-based attorney hired by Scott to represent the governor’s office, argued that "it doesn't matter if it's a public account or a private account" because an email is a public record only if it relates to state business. He argued the governor's office produced all emails sought by Andrews that involved state business.
“Who is to determine whether it was produced or not? How does he verify that,’’ Judge Francis asked.

The First Amendment Foundation has asked to intervene in the case, arguing that the position by Scott's office that employees and former employees are the custodians of public records -- and not the state -- when documents are contained on private accounts and devices "has potentially broad implications."

"If this position is upheld, Florida citizens will no longer be able to obtain a complete response to a public records request made to a public agency,'' wrote FAF lawyers Carol Jean LoCicero in the motion to intervene. Francis has not ruled on that motion.