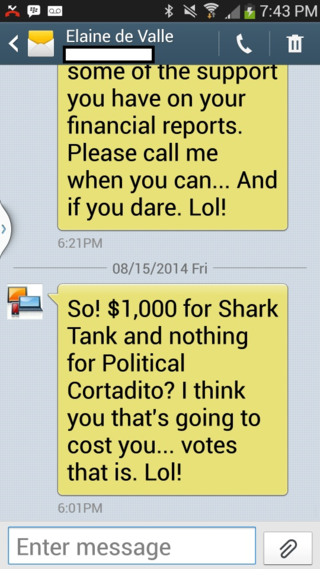 Congressional candidate and Miami-Dade School Board member Carlos Curbelo has accused a local political blogger of asking him to advertise on her website in exchange for friendly coverage.

Curbelo provided a cell phone text message from Elaine de Valle, who writes the Political Cortadito blog, in which she notes his campaign has paid to advertise on the conservative Shark Tank blog.

"So! $1,000 for Shark Tank and nothing for Political Cortadito?" says de Valle's message, dated Friday. "I think that's going to cost you... votes that is. Lol!"

De Valle, a former Miami Herald reporter, said she meant only what she wrote: that Curbelo will lose votes by not advertising to her readership. She says her blog has more than 100,000 monthly page views.

Curbelo's communications director, Wadi Gaitan, said the campaign "will not be extorted by agents of other campaigns posing as journalists."

"Under no circumstances will we purchase ads on her page for favorable coverage, nor will we respond to her petty propaganda," he added.

Bloggers have had to wrestle with how to report news, analyze politics and sell advertising, blurring the traditional divide between editorial and advertising content. De Valle said she has an advertising manager who handles sales, but acknowledged clients sometimes reach out to her.

That doesn't slant her coverage, according to de Valle. Curbelo doesn't answer her calls or texts, so she poked at him with her message: "I was being my flippant, sarcastic self," she said.

On Sunday, Curbelo objected to WPLG-ABC 10 reporter Michael Putney for having de Valle as a roundtable guest on This Week in South Florida. The discussion took place immediately after a debate among Curbelo and the four other Republicans vying to challenge Democratic Rep. Joe Garcia.

De Valle then wrote that Curbelo was trying to get her off the show.

At least one of Curbelo's rivals has bought ads on de Valle's blog: Cutler Bay Mayor Ed MacDougall's firm, ChoiceOne Companies, had an ad on the site this week.