"Daniella Levine Cava owes this community, its children and future generations an apology for lobbying and supporting the biggest squandering of public tax dollars to date -- the disastrous Marlins Stadium Deal of 2008," Bell said in a press release emailed by her campaign.

Bell's camp pointed to remarks delivered on Feb. 21, 2008, by Abigail Vladeck, policy director of the Human Services Coalition (now Catalyst Miami) in which Vladeck said she "share[d] the sentiments" with then-County Mayor Carlos Alvarez and City Mayor Manny Diaz "that in order to be a major league city, Miami needs a major-league baseball stadium."

"The funding for the deal is certainly a feat of creativity and ingenuity," Vladeck added. At the time, Levine Cava was the Human Services Coalition's chief executive.

But though she might not have said so outright, Vladeck was actually speaking against the stadium proposal, a speaker's card she filled out that day shows. 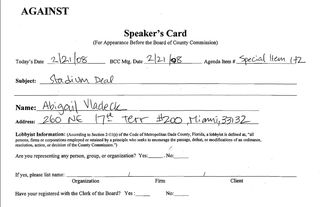 A handout she gave county commissioners listed ways to amend the agreement with the Marlins to make it "a good deal for all of Miami." (The handout can be viewed here, scrolling down to page three.)

Levine Cava responded Friday with a statement bashing Bell. The two women are vying for District 8 in a heated, partisan contest.

"She is lying about my record and the facts simply don't hold up," Levine Cava said. "Unlike my opponent, I have long been a champion of holding government accountable and ensuring taxpayer dollars are well spent."

Listen to Vladeck's remarks yourself in this video of the more than 10-hour-long commission meeting. Vladeck spoke at about the 4:35 mark.