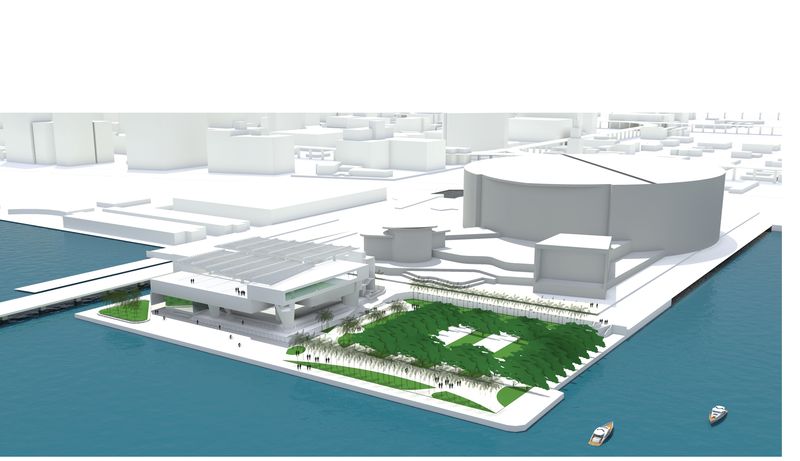 On the heels of winning initial approval to build on county-owned waterfront, backers of the proposed Cuban Exile Museum pitched the project  Monday as poised for broader success. Key to the mission: Convincing the public they can raise the hundreds of millions of dollars needed to build and operate the museum without public funds, a key requirement of county commissioners who backed the project last month.

Doing so would be a novelty for the neighborhood:  Both the Perez Art Museum Miami and the under-construction Frost science museum both rely on county subsidies for their budgets, even after securing a combined $265 million in county funds for construction of their facilities in Miami's nearby Museum Park.

Exile Museum organizers, including former Miami city manager Pete Hernandez, say they aren't daunted. In a meeting with The Miami Herald's Editorial Board, the group pointed to unique support and passion in the Cuban community as their source of confidence.

"With all due respect, no one has a personal saga with art or science,'' said  Nicolás Gutiérrez, who took the lead in Monday's presentation.

Organizers say it will cost about  $125 million to build the museum, which would rise in downtown Miami on land known as Parcel B, just behind the Miami Heat's AmericanAirlines Arena (which sits on Parcel A of the county site). The museum would celebrate and explore the Cuban exile story, from the historical events in Cuba that prompted the exodus to immigrants' ongoing impact on world affairs.

"We think it mines a deep-seated vein of sentiment, for lack of a better term. From little old ladies in Hialeah and Little Havana, to big Cuban-owned companies or executives at large public companies,''  said Gutiérrez, a Miami lawyer. "As important as art is or science is, those are much narrower topics that probably have less of a sector that is an interested in donating or visiting."

The museum still needs final approval by the Miami-Dade commission. In July, the commission voted 8 to 3 to  endorse the site and start negotiations with museum organizers over the plan.

Though organizers on Monday touted the museum as perfect matching the rise of Cuban exiles' wealth and influence, they also said they were realistic about the challenge. Hernandez said that in upcoming negotiations with Miami-Dade, he expects fund-raising deadlines that could trigger the museum losing its tentative hold on the land.

"If you haven't got a certain amount by a certain milestone, then you don't deserve to go forward,'' Hernandez said. "You don't want to have a five-year lease agreement, and then they have to wait five years to see if we're going to succeed or not."