« Council aims to fight human trafficking | Main | Years before child was mauled by dogs, DCF was warned of dangerous home » 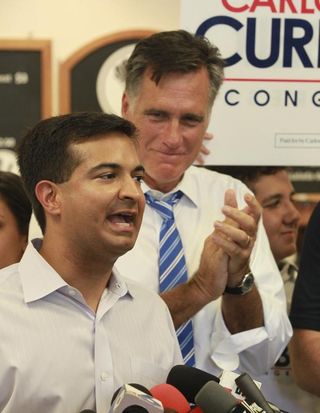 "It's nice to be out campaigning for other people," Romney told reporters at Vicky Bakery, where he went behind the serving counter to try the cupcakes. He appeared relaxed in jeans, shirt-sleeves and a loose tie.

When asked if he would consider a third presidential run, he said, "No, I'm not doing that."

The Obama administration, Romney said, "has a good heart but doesn't understand what's needed to get America working for the middle class."

Democrats have ignored the other candidates and instead focused on Curbelo, the presumed frontrunner in the race to challenge incumbent Joe Garcia. The party organized a group of about 20 demonstrators outside the bakery. They brought back chants from the 2012 presidential campaign, including "We are the 47 percent." At one point, a Curbelo supporter yelled at them, in Spanish: "Comunistas!"