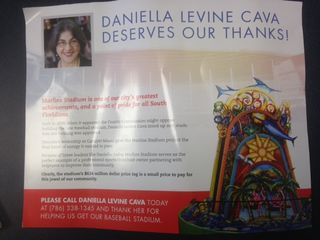 The mysterious advertisement mailed to some Miami-Dade County voters this week is an attack against commission candidate Daniella Levine Cava -- disguised as a sarcastic compliment.

"THANKS FOR DELIVERING MARLINS STADIUM!" the flier says. "Clearly, the stadium's $634 million dollar price tag is a small price to pay for this jewel of our community."

The ballpark's unpopular public financing contributed to the ouster of a former county mayor and commissioner, and the issue has become the third rail of county politics. Incumbent Lynda Bell, a commissioner since 2010, has accused the nonprofit social-services agency Levine Cava founded, now known as Catalyst Miami, of supporting the stadium deal.

Bell has cited a 2008 commission meeting in which the nonprofit's policy director spoke about how to make the ballpark agreement better. (The flier says it was Levine Cava who "stood up and made sure the funding was approved.") The policy director called the financing deal "a feat of creativity and ingenuity."

She didn't say so outright, but the policy director was speaking against the deal, according to the speaker's card she signed, and proposing ways to make it more palatable. "This was an example of how we were trying to turn lemonade out of lemons," Levine Cava said on television last week.

Other activists whose groups were part of the coalition against the stadium, including Frank Del Vecchio of Miami Beach, have attested that Levine Cava's nonprofit organized in opposition of Marlins Park.

But Bell, caught in the most heated commission race of the year, has dismissed that.

Levine Cava blamed the flier on Bell. "Unlike my opponent, I have long been a champion of holding government accountable and ensuring taxpayer dollars are well spent," Levine Cava said in a statement late Wednesday.

The mystery flier, though, didn't come from the commissioner.

Instead, it came from a Tampa-based political group -- with the liberal-sounding name Committee for Progressive Values, Inc. -- registered to a Republican consultant, Anthony Pedicini. Also listed on the committee are Carmela Falcone of Melbourne and Michael Milner of Jensen Beach -- a duo who have registered other political groups, including one that mailed a Dolphins stadium-related advertisement to Miami-Dade voters last year.

Pedicini did not immediately respond to an emailed request for comment.

Committee for Progressive Values hasn't reported raising any money since June 20. Among its contributors before then was Carlos J. Gimenez, the son of Miami-Dade Mayor Carlos A. Gimenez. The mayor is backing Bell. The younger Gimenez said Thursday he made the contribution for a May poll unrelated to the commission race.

Commission races are nonpartisan, but Bell is a Republican and Levine Cava is a Democrat -- and Democrats in particular have made sure to highlight that on the campaign trail. Now Republicans appear to be stepping in to assist Bell.

Even before the flier, Levine Cava was using the Marlins attack line as a fundraising pitch to donors. "Help Daniella expose these lies," her campaign emailed supporters last week.

But Levine Cava has also had to twice explain her former agency's ballpark stance on television, and she put out an automated call denying supporting the stadium. If explaining is losing in politics, then Levine Cava can probably expect Bell and her supporters to keep bringing up Marlins Park.