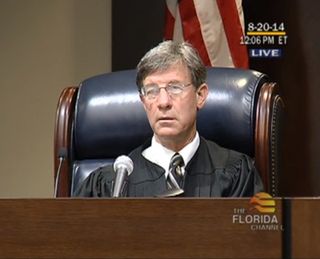 The racial tensions that coursed for years beneath the surface in Florida’s redistricting battle came into sharp focus Wednesday as lawyers for each side blasted each other for attempting to use black voters for partisan gain.

The arguments emerged at a hearing Wednesday called by Leon County Circuit Court Judge Terry Lewis to decide whether the Florida Legislature’s redrawn congressional map meets the constitutional standards imposed by voters in 2010.

Lewis said he will decide "as quickly as I can’’ whether to accept the new map drawn by legislators last week in a three-day special session. Legislators had until Aug. 15 to revise two congressional districts he ruled invalid – one held by U.S. Rep. Corrine Brown, a Democrat, and the other held by U.S. Rep. Dan Webster, a Republican.

At the center of the controversy is Congressional District 5, which has been held by Brown for 22 years since the Legislature linked together African American communities from North and Central Florida so they could elect the first black to Congress since Reconstruction.

Lewis ruled the "bizarrely-shaped" district, however, was an unconstitutional gerrymander under the new Fair Districts because it served to benefit Republicans.

The legislature made minor changes to the map but kept most of it in place, a decision supported not only by Brown but the Democrat-leaning NAACP. The votes for the Legislative plan reflected the racial divide with black legislators aligned with Brown voting for the plan while other Democrats in both chambers, including blacks in South Florida, opposed it.

"The map does exactly what the court asked,’’ said George Meros, lawyer for the GOP-led House of Representatives.

The judge’s ruling, however, left open to interpretation what he will consider an acceptable remedy to the flawed maps so, faced with uncertain options, both sides are trying to make the case that their proposal helps black voters most.

Lawyers for the voters groups that brought the lawsuit argued that while the Legislature’s map preserved Brown’s black-majority district, the way it is configured actually deprived African American voters in Central Florida of electing their own congressional representative.

They called Harvard University redistricting expert Stephen Ansolabehere who testified that the Legislative map links African American communities into Brown’s district in a way that "interferes" with the communities’ ability to elect two blacks to Congress, instead of one.

"They attempt to say that they have to have it this way because they have to protect the minority rights,’’ said David King, lawyer for the coalition of voters groups. "That is a hollow claim when what they are really protecting is the Republican interests, and they are constraining more African American representation by that approach."

The coalition presented the court with an alternative map that would have dismantled Brown’s serpentine-shaped district that sprawls from Jacksonville to Orlando, and replaces it with two districts they said are designed to elect two blacks to Congress.

Their map creates a black majority district that stretches from Jacksonville to Tallahassee across North Florida and another that shift’s Webster’s districts into a district that could favor a black Democrat.

The Legislature "did not solve the problem," King argued, but "just patched up one district" leaving an invalid map "essentially the same."

But Meros criticized the plaintiffs’ argument as short-sighted and misleading.

He said Congressional District 5 was drawn 22 years ago "to remedy rampant discrimination in Northeast Florida which prevented any black elected to Congress since Reconstruction."

The Fair Districts rules prevent the state from diminishing that voting strength and argued that the discrimination of the past "has not stopped."

Meros cited testimony from NAACP officials from Alachua and Marion counties who said that their counties still have not elected a black to any county-wide office is proof that voters still engage in block voting against blacks.

The plaintiff’s alternative map would "yank out" of Brown’s district the same communities that have suffered from "racially-polarized voting that prohibits African Americans to elect representatives of their choice,’’ he said.

He argued that the legislature’s plan preserves those communities in a black-majority district, and preserves their voting strength as the Fair District rules require.

Meros also cited testimony from trial depositions that showed the voters groups acted in concert with political operatives with Democratic Congressional Committee and the National Committee for an Effective Congress, an organization that works to elect Democrats to Congress. The strategy, he said, is to disperse black voters from Brown’s sprawling district into new districts that will elect more Democrats.

"It’s the national Democratic effort to say it’s okay -- you might not be able to elect a black but you’ll get a white Democrat to support you. And that’s wrong,’’ he said. ".…It takes us to a dark day."

Ansolabehere, the redistricting expert, testified that if the alternate map proposed by the voters groups had been in place in 2012, Val Demings, a black Democrat, would have defeated Webster in the District 10 race and a black could have been elected to Congress in the east-west North Florida district.

"Blacks and Hispanics vote collectively together in the center of the state,’’ he said, and blacks would be the majority voters in the proposed district. "The black preferred candidate would win" about 58 percent of the vote.

Meros asked him if he knew that the map proposed by the plaintiffs was drawn with the help of Eric Hawkins, who works for NCEC.

Ansolabehere acknowledge Hawkins drew the map but said he assumed he was paid by the plaintiff’s law firm.

"I was just asked to evaluate maps and give my comment on maps,’’ he said.

Lewis said he was aware of the "time sensitve nature of this case" as the contested districts remain in limbo as the primary and general elections draw near but he gave no indication when he will have a ruling.

Meanwhile, the likelihood of a special election before the Nov. 4 general election continues to dim. The Florida Secretary of State presented Lewis with a proposed schedule that would establish a special primary election for the redrawn districts in March and a general election in May. The plaintiffs have offered no alternative to that schedule.

Both sides also continue to leave open the possibility that whatever Lewis rules on the legislature’s map could be appealed.