The one about Jeb Bush, Terry Schiavo, the ACLU and medical marijuana 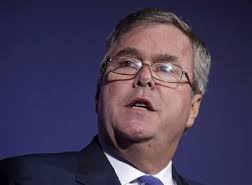 Former Gov. Jeb Bush came out in opposition to Amendment 2 today and his suggestion that people should vote against the amendment to legalize marijuana provoked some harsh criticism from the ACLU of Florida.

Bush joined the Florida Chamber of Commerce and other business groups to denounce the proposed amendment on the November ballot that will allow patients with a list of debilitating conditions to get a doctor's permission to treat the condition with marijuana.

“Florida leaders and citizens have worked for years to make the Sunshine State a world-class location to start or run a business, a family-friendly destination for tourism and a desirable place to raise a family or retire,” Bush said in a statement.

“Allowing large-scale, marijuana operations to take root across Florida, under the guise of using it for medicinal purposes, runs counter to all of these efforts.  I believe it is the right of states to decide this issue, and I strongly urge Floridians to vote against Amendment 2 this November.”

But Howard Simon, executive director of the ACLU of Florida, noted how Bush intervened to prevent the family of Terri Schiavo, who was severely brain damaged, from removing her feeding tube that had kept her alive for 15 years. The ACLU represented Schiavo’s husband, Michael.

“Once again, Jeb Bush is trying to impose his views on medical treatment on Florida patients,’’ Simon said in a statement. "Amendment 2 is about allowing people suffering from debilitating conditions to access treatment plans that include using marijuana as a medicine, with the supervision of a doctor, to alleviate their pain and suffering...”

“Jeb Bush was wrong about limiting patients’ rights then and he is wrong now,’’ Simon said. “You would think that after his shameful performance in the Terri Schiavo tragedy Jeb Bush would be too embarrassed to offer any advice on the rights and well-being of patients. These are medical decisions to be made by doctors about what is best for their patients; it is not a role for politicians.”