« With black voters crucial to Charlie Crist, will they turn out? | Main | NYT exposes the source in the Gary Hart affair » 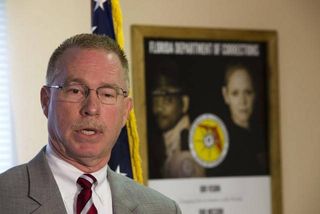 Thirty-two guards with the Florida Department of Corrections were fired Friday afternoon in what union officials were calling a “Friday night massacre.” All were accused of criminal wrongdoing or misconduct in connection with the deaths of inmates at four state prisons.

One of them is Rollin Suttle Austin, the subject of a Miami Herald investigative report coming Sunday. The Herald has published a string of articles alleging brutality and corruption in the prison system.

Eighteen of those fired by Secretary Michael Crews were involved in the death of Matthew Walker at Charlotte Correctional Institution on April 11. Walker, 55, was killed in what the DOC is calling an “inappropriate use of force.”

Five other fired corrections officers from Union Correctional had been accused of using excessive force in the death of inmate Rudolf Rowe on Aug. 16, 2012. Story here.