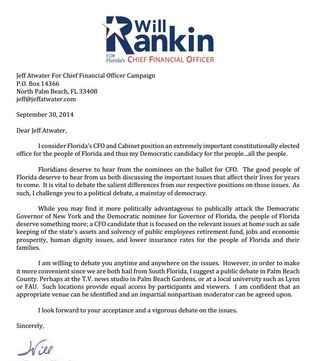 Democrat William Rankin has challenged Chief Financial Officer Jeff Atwater to a debate, but just like nearly everything else with Rankin's campaign the idea is not gaining much traction.

In a letter dated today, Rankin said he is willing to debate his Republican opponent "anytime and anywhere on the issues." Because they are both from South Florida, he suggested Palm Beach as a location and floated the ideas of a TV station or a local university as the setting.

"While you may find it more politically advantageous to publically attack the Democratic Governor of New York and the Democratic nominee for Governor of Florida, the people of Florida deserve something more; a CFO candidate that is focused on the relevant issues at home such as safe keeping of the state’s assets and solvency of public employees retirement fund, jobs and economic prosperity, human dignity issues, and lower insurance rates for the people of Florida and their families," Rankin wrote.

Atwater's campaign seems less than enthusiastic about the idea. Spokesman Brian Hughes would only say the candidates may "share a stage" at some point on the campaign trail, a far cry from a structured debate that Rankin proposed.

"Jeff Atwater is busy traveling the state to lay out a strong record of success as CFO," Hughes said. "With public events and forums yet to come, I imagine there would be an opportunity for Jeff and his challenger to share a stage if schedules allow."

Rankin is considered a long shot to unseat incumbent Atwater, who has raised $2.7 million as of Sept. 19. Rankin has less than $16,000 in cash in his account.

The Florida Democratic Party has also kept Rankin at arm's length, and he has not campaigned alongside other statewide candidates for office.