Hillary Clinton to stump with Charlie Crist Oct. 2 in Miami 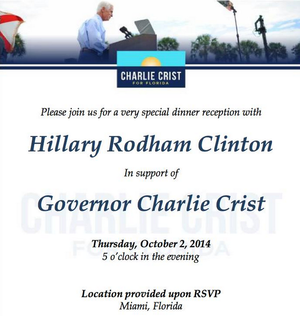 Former Secretary of State and early 2016 presidential frontrunner is coming Oct. 2 to Miami to sign her new book "Hard Choices" and campaign with Democrat Charlie Crist.

Clinton's event with the candidate for governor comes one month after her husband, former President Bill Clinton, stumped with Crist in Miami.

There's not much detail about the newest Crist-Clinton event, which was announced on Facebook by Bob Poe, the Charlie Crist for Florida committee's chairman and treasurer. It takes place at 5 p.m. somewhere in Miami. That's about an hour and a half after Mrs. Clinton hosts her Books & Books signing in Coral Gables.

Hillary Clinton's appearance with Crist is a no-brainer: She's still wildly popular with Democrats and appeals to women.

The big question: What about President Obama? Crist said he'd love to campaign with the president, but there's a divide among Democrats -- including Obama's own advisors -- about how much that will help or hurt. On one hand, Obama's favorability ratings are pretty poor. On the other hand, people who would vote against Crist because of Obama are likely to vote against the Democrat anyway. But those whom Crist needs -- especially African-American voters -- might turn out in greater numbers if Crist shows he still has Obama's back.