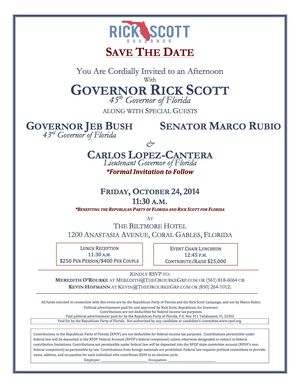 There's an outside chance former Gov. Jeb Bush and U.S. Sen. Marco Rubio might run against each other for president in two years. But they're certainly aligned on almost everything else, including their support of Gov. Rick Scott and their dislike of Democrat Charlie Crist (who lost to Rubio in the 2010 Senate race).

So Bush, Rubio and Rubio's longtime friend, Lt. Gov. Carlos Lopez-Cantera, are headlining an 11:30 a.m. Oct. 24 Scott fundraiser at the Coral Gables Biltmore, where Bush has an office. Bush lives in the city as does Lopez-Cantera. Rubio lives next door, in West Miami.