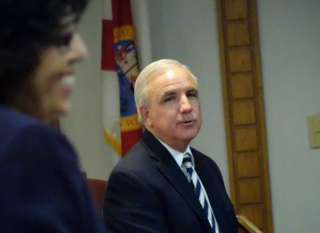 When Steven Bateman paid a visit to County Hall last year, he pressed officials on speeding up permits for a crucial South Miami-Dade sewage pump station.

But Bateman never disclosed that he was on the payroll of a health-care company standing to benefit from the pump station, Miami-Dade Mayor Carlos Gimenez told jurors Wednesday.

“I assumed he was there as the mayor of Homestead,” Gimenez testified.

The county mayor’s testimony highlighted the third day of the corruption trial for Bateman, who is accused of landing an illegal gig as a consultant for Community Health of South Florida.

Gimenez’s testimony is key for prosecutors looking to prove that Bateman wielded his position as mayor to go to bat for a secret employer paying him a $125-an-hour.

Miami-Dade prosecutors say Bateman billed for 29 hours of consulting work on the pump station issue in February 2013, including his interactions with Gimenez as well as the city’s engineer — all done, at least outwardly, in his capacity as mayor.