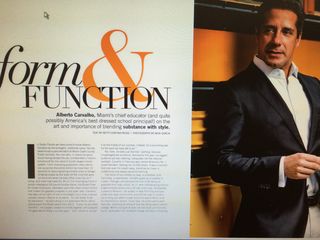 The October issue features a Q-and-A with the head of the nation’s fourth-largest school district (and principal of two schools) on “the art and importance of blending substance with style.”

Though his students used to call him “Mr. Armani,” Carvalho told the magazine he doesn’t give much consideration to fashion — the 2014 Superintendent of the Year points out he only wears white shirts.

Carvalho, 49, said he started to wear a suit and tie to work because his first principal wondered how he’d be able to tell a young Carvalho apart from the students.

“No Italian fitting suit or shoe will ever change your heart or your soul,” Carvalho told the magazine.