Today's Quinnipiac Poll showing Gov. Rick Scott leading Democrat Charlie Crist for the first time in the survey's history is a testament to the Republican's ads and their go-for-the-throat negative messaging.

But don't just look at Scott's inside-the-error margin lead of 2 percentage points (44-42 percent). Check out the favorability of both men since the summer of 2010 in Quinnipiac's surveys. 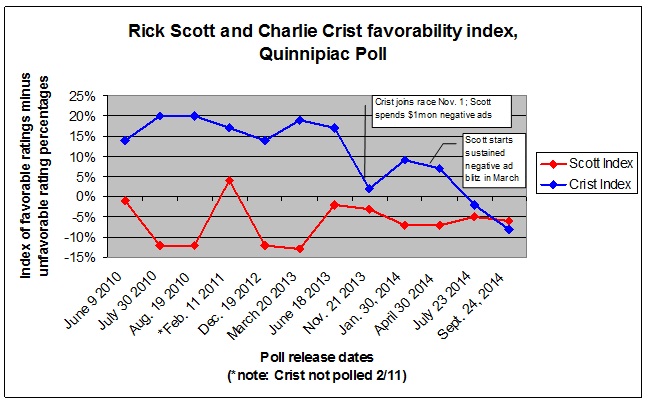 Under a sustained assault from Scott, Crist's favorability index from last summer until now has plummeted 25 points to -8 today (that is, in today's poll 49 percent have a negative impression of Crist while 41 percent have a positive impression). But Scott's favorability index has only notched down 4 points to -6 (42 percent see him favorably, 48 percent unfavorably).

The damage Scott has done to Crist is starkly illustrated when you examine their positions in 2010.

Four years ago, Crist was an embattled incumbent who switched parties from Republican to independent in a failed bid to top Republican Marco Rubio in the U.S. Senate race in which the then-governor wound up dividing the liberal vote because Democratic Congressman Kendrick Meek of Miami stayed in the race.

Still, even with the party-switching and the bad economy at the time, Florida voters still liked Crist in the Quinnipiac Poll, with 49 percent favoring him and 35 percent disfavoring him in June 2010. That means his favorability index was +14. It inched up to +20 for Crist, even though he lost the election.

Scott, however, was in the midst of a bruising GOP primary where Attorney General Bill McCollum played up the newcomer's history with Columbia/HCA, which was socked with a record $1.7 billion Medicare fraud fine.

Only 29 percent favored Scott and 30 percent disfavored him in June 2010, giving him an index of -1. It grew to -12 before the election, where he barely squeaked by. In his first two months in office, Scott earned his only positive index, +4. Then, after proposing mammoth cuts to schools, scuttling high-speed rail and clashing with fellow Republicans in the Legislature, Scott's ratings fell and his index has been negative ever since.

There was really only one sure route for Scott to take: Going negative.

Once Crist announced officially in November, Scott greeted him with a $1 million negative ad buy. In total, Scott has spent at least $36 million on TV ads, and the overwhelming number of them has been negative.

And it has worked.

After holding his fire in spring and then starting to shoot back in July, Crist is now starting to heavily fire on air as well. In one respect, because the race is close to tied, Crist is in relatively good shape after having been savaged for so long on TV. We're $50 million into the spending, and much more is to come.

But it's clear Crist has lost, at least temporarily, his greatest asset: His likability. And by fighting fire with fire, Crist runs the risk of keeping it that way because mudslinging costs the mudslinger as well. It also depresses the electorate. And the smaller the electorate, the more Republican-leaning it generally becomes -- especially in a midterm.

Crist has campaigned recently with the man from Hope, Bill Clinton, and his campaign is loaded with loyalists of the self-styled Hope-and-Change president, Barack Obama. But right now, there's not much hope coming from Crist.