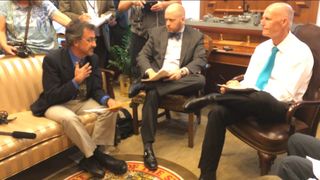 If Florida’s climate scientists have proven anything this summer, it is that they are careful listeners.

After Gov. Rick Scott told them last month that he is “focused on solutions,” 42 scientists from Florida colleges and universities crafted a letter asking the governor and state policy leaders to convene a “Climate Science & Solutions Summit” to be held this fall to come up with an action plan for Florida.

“As scientists, we would like the opportunity to contribute scientific information to a plan which would address what is at stake for our state,’’ the scientists wrote.

The letter, to be released on Thursday and obtained by the Herald/Times, comes a month after five of the state’s top climate scientists met with Gov. Rick Scott to discuss climate change.

The scientists asked for the meeting after Scott said that he did not have an opinion on the issue because he was “not a scientist.”

The scientists first wrote to Scott saying they “were scientists” and would welcome the opportunity to explain to him why Florida is especially vulnerable as rising sea levels are flooding streets in Miami Beach, salt water is encroaching on drinking water supplies, and warming water is damaging the coral reefs.

But just hours before the Aug. 19 meeting in his office, the governor told reporters that instead of talking about the causes of climate change, he wanted to talk about solutions. Story here. Here's the letter: Download SCIENTISTS ON CLIMATE SCIENCE AND SOLUTIONS

Below: Climate scientists outside Florida's old Capitol and on the 22nd floor of the new Capitol, surveying the topography and the state's former ocean ridge. 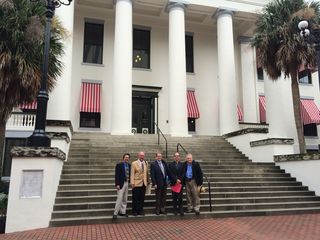 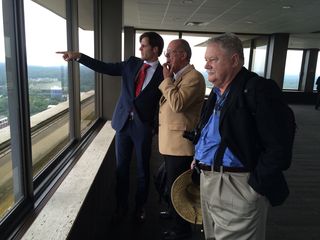