Citing “tragic and unacceptable” poverty numbers among Holocaust survivors in the U.S., a leading advocate from South Florida told a congressional panel Thursday that Congress should do more to help such survivors get the care and resources they need. 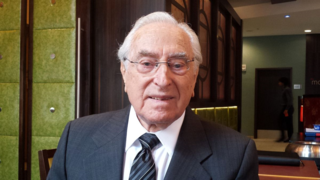 While emphasizing that survivors are not seeking additional funds from American taxpayers, Jack Rubin said Holocaust survivors were looking for Congress to help secure the funds from the German government and businesses that profited from the Holocaust.

“Unfortunately, the existing system has fallen tragically short of what survivors need and deserve,” Jack Rubin said in his prepared testimony. “The current funding and care delivery system is difficult for survivors to access, and also severely underfunded.”

Rubin is from Boynton Beach, Fla. He was born in the former Czechoslovakia and survived several Nazi concentration camps and death camps.

He spoke before a joint subcommittee hearing of the U.S. House Foreign Affairs Committee, which was exploring the difficulties in recovering assets for Holocaust survivors.

Driving Rubin’s effort is the fact that about 55,000 Holocaust survivors in the U.S. today live near or below the official federal poverty level, and that they need help with basic medical and dental care, as well as food, rent, utilities and transportation, he said.

He testified about the effort in January as well, before a Senate committee.

On example he cited in his Thursday testimony concerned dental care – or the lack of it.

“Most survivors have extensive dental needs because during the Holocaust, we had no opportunity to care for our teeth, suffered extreme malnutrition, as well as beatings and other horrible deprivations,” he testified. “Unfortunately, dental services are paid for from the same emergency funds that are limited to $2,500 per year. And the dental work that many survivors need costs thousands and thousands of dollars… This is a very, very big problem. The lack of proper dental care harms survivors’ dignity, and also puts them at risk for bad nutrition and cardiac problems.”

U.S. Rep. Ileana Ros-Lehtinen, the Miami Republican who chairs one of the subcommittees, said “more can and must be done.”

“With the average age of Holocaust survivors estimated at 82, time is truly running out for us to bring them some form of justice, some kind of closure so that they can live out the rest of their days in dignity and comfort,” she said in her prepared statement.

Rubin’s testimony, as well as that of other witnesses, is available at the committee Web site.