Labor Day is over and now the real polling work is underway in Florida’s governor’s race. That means it’s time for another unskewing of the polls, in this case seven surveys released since Sept. 1 for which crosstab data were made available.*

Taken individually, each poll shows a close race, with either Gov. Rick Scott or Democrat Charlie Crist leading by an insider-the-error-margin amount. Taken together and aggregated, however, the polls indicate an even tighter contest.

Scott has the slightest of leads: about 43.3 percent to Crist’s 41.3 percent.

The rough 2 percentage-point margin isn’t a commanding lead. It looks even less-impressive considering the April average of the race’s polls: a Crist lead of about 0.4 percentage points.

Viewed one way, the race has moved a mere net 1.6 percentage points in Scott’s favor while he and his allies have outspent Crist’s campaign by nearly 3:1 on TV since March ($27 million to $10 million). A large number of those ads have been negative, attacking Crist more than boosting Scott. Some political consultants have been describing Scott’s campaign position as the result of some tactical genius – but it’s looking more like brute force right now, the equivalent of dropping an atomic bomb of manure. It’s gonna make Crist stink.

Basically, the campaign looks frozen, which the following poll track of SurveyUSA/WFLA-TV shows. Neither candidate is pulling consistently ahead. 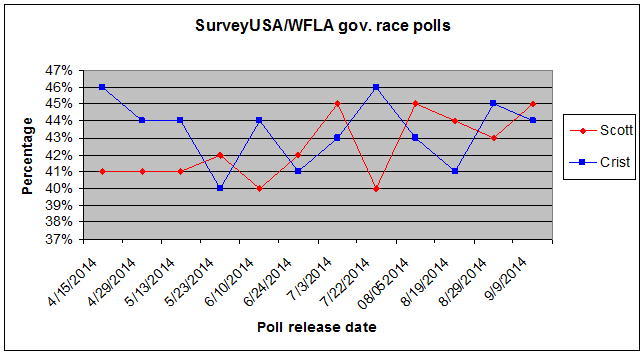 Note how Crist's lead shrunk by May. Crist wasn't on TV at the time. Scott was. It's a graphic indication of how Scott’s campaign simply took a page from another reelection campaign of a disliked incumbent, President Obama, and used his money to negatively define his opponent early.

Crist is fighting back with negative ads of his own. But all the negativity probably helps Scott more. Negative campaigning can depress turnout, and smaller-turnout elections favor Republicans.

The immediate beneficiary of all the negativity could be Libertarian Adrian Wyllie, who’s fashioning himself as the alternative to politics as usual. He’s getting about 4 percent in the polling averages.

Looming even larger: the 11 percent of undecided voters.

Crist has structural problems, too. As a Democrat, his party typically underperforms in midterms. As a newly minted Democrat who did little to engage his primary opponent, the former Republican might have troubles with his base.

Crist, until he lost in 2010, was also accustomed to having the bigger war chest than his opponent and having the luxury of being able to spend his money later in the election. He doesn’t want to start blowing all of his cash now and wind up broke weeks before the Nov. 4 Election Day. But if Crist doesn’t do better soon, he could lose one of his biggest attributes that we heard about from voters in the Aug. 26 Democratic primary -- that Crist can beat Scott, that Crist is a winner. If Crist looks like a loser before absentee ballots drop in the mail at the beginning of next month, it could increase the chances that already flakey Democrats could again flake out.

So Scott’s strategy is working. Albeit not by much. But he doesn’t need to win by much. Neither does. A razor-thin recount margin will suffice for either candidate.

A noted about method: Averaging polls isn’t an exact science and here we're using different polls, with different methodologies and treating them all the same. Some are better. Some are worse. Some use live callers to contact voters by landline and cellphone (cellphone voters tend to be a little younger and a little-less conservative). Others use robo-polling technology that only uses landlines. Most polls random-digit dial voters in an area and ask them to self-identify their party and voting likelihood. Other pollsters pre-select respondents by calling them off a voter list that identifies their actual party on file and their chances of voting. One poll uses the internet. More of the polls that have been recently released also are conducted by GOP-linked pollsters or have leaned GOP in the past, although the results are all about the same.

And, as with any poll, there’s some art or estimation to the science or math (which some will question, bash or praise, usually depending on who’s winning or losing or who's just a troll). Like last time, we averaged the partisan crosstabs, then indexed the results to a turnout model based on the average of the 2010 and 2006 governors’ races. That produced the topline horse-race number. But unlike last time, this polling aggregate separately analyzed five self-ID polls and two actual-registration polls. The self-ID polls were indexed to the averaged partisan turnout in exit polls (where respondents self-ID). The actual, hard-registration polls were indexed to the average actual partisan turnout as reflected in the Florida voter file. After generating the topline support for each candidate, the two separate types of polls were then averaged together.

The bottom line: there wasn’t much different between self-ID and hard-registration poll aggregates. The former showed Scott ahead of Crist by about 43 to 41 percent (a 2.24-percentage point margin to be exact) and the latter had Scott over Crist 43.4 to 41.7 percent (1.7% margin).