1.5m votes cast, GOP still leads but Dems have cut advantage-rate in half since Oct. 6

About 1.5 million pre-Election Day ballots had been cast as of Friday morning and the Republican advantage over Democrats is slowly eroding in terms of a percentage advantage.

That's the first time since votes have been posted Oct. 6 that the Republican advantage has been cut to below 10 points. On Oct. 6, when overseas ballots (mainly military) were coming in, the GOP advantage was 20.5 percentage points.

But elections aren't decided on percentage-point gains. They're decided by the number of ballots cast. Votes won't be tallied until Election Day. But the totals by party in ballots cast before then gives us an idea about the strength of each side.

And the GOP is still winning outright: 144,109 more ballots cast than Democrats by absentee and in-person early vote.

That's a small increase of 1.3 percent for the GOP since yesterday, while the total number of ballots cast increased by 11.2 percent.

Here are some dueling memos from the campaigns about turnout (Scott and Crist), background on related posts are here, and here are the numbers as of this morning: 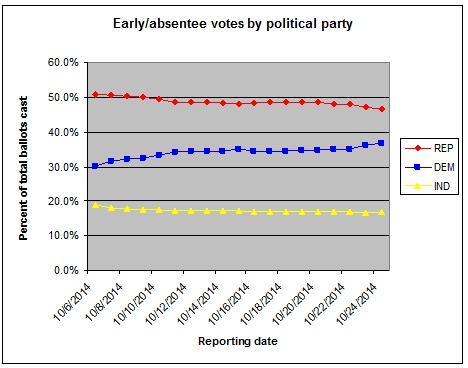