South Florida in-person early voting turnout might have been relatively lighter than expected this weekend, but Democrats for the first time this election still topped Republicans in pre-Election Day ballot casting at the polls in the entire state.

But, thanks to strong vote-by-mail absentee ballot returns, Republicans still lead Democrats in overall early voting: 138,572 of the more than 1.8 million ballots cast as of this morning. In relative terms, the GOP is up 7.6 percentage points.

Either way, the GOP lead over Democrats has been shrinking. Yesterday it was about 147,000 or 8.4 percentage points.

At this rate, Democrats could come within 3-6 percentage points of Republicans in total ballots cast heading into Election Day. In raw votes, at the current rates, Democrats could wind up trailing by anywhere from 80,000 to 150,000 total ballots cast -- and with a 455,000 registered-voter advantage over Republicans, that's not an ironclad GOP lead at all. Then there's the matter of independents, who have cast 17 percent of the early ballots so far. Most polls show Charlie Crist is winning them, which potentially gives the Democrat more cushion and could put Gov. Rick Scott in an even tougher spot (please note: these are all estimates based on prior return rates and polling data. Early, absentee and Election Day votes will be counted Nov. 4, not before.)

Prior posts on this and related topics can be found through the Florida Voters tab here; and here are the numbers: 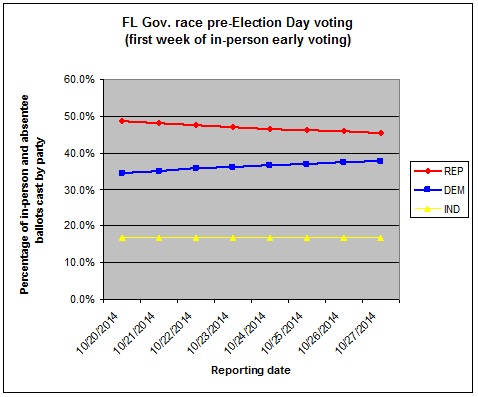