Then get into the business of making and running TV ads for the Florida governor's race, where about $12.7 million in broadcast and cable buys has been dropped since last week.

The election team for Gov. Rick Scott, who admitted this week to tapping his personal millions as a campaign “investment,” plopped down almost $7.6 million for current and future ads since Oct. 17. That's 60 percent of the total increase. Democrat Charlie Crist's team put in another $5.1 million, or 40 percent. Crist has reserved air time through next week. Scott has bought through Nov. 4, Election Day.

But Republicans right now are outvoting Democrats in pre-Election Day ballots by about 46-37 percent (a 144,000-vote margin). Democrats are gaining, however. And registered Democrats outnumber Republicans 39-35 percent (a 455,000-voter margin) and therefore have far more voters to turn out, potentially. Also, most recent polls show Crist winning independents (26 percent of the voter rolls and 17 percent of those who have cast ballots).

One noteworthy aspect of the past week's ad-buy increases: Crist outspent Scott in Tampa Bay. It’s a sign that Crist feels a need to protect his hometown media market, where Scott has saturated the airwaves with $18 million in ad buys since he began his sustained aerial bombardment in March. Crist is now at $10 million total in Tampa Bay.

For the 2014 election, Tampa has suffered through the most ads ($28.4 million) followed by Orlando ($24.7 million). These two ends of the I-4 corridor, the swing area of the swing state, will likely decide the election if North Florida goes heavy for Scott and South Florida for Crist. (More about the media markets and ad spending here, just change the dollar figures). Tampa and Orlando account for more than 55 percent of all ad spending in Florida's ten media markets.

Despite Scott calling Crist a “mudslinger” or suggesting on the campaign trail that he’s going positive, he’s not. A clear majority of Scott’s ads are negative. Same with Crist.

But Crist and his allies, namely NextGen Climate, are less negative because they have spent less. In all, team Crist has dropped at least $31.6 million since July, when Democrats began to respond to Scott after he owned the airwaves for almost four months solo. Team Scott has unloaded about $64 million since March, and at least $1 million more for a weeklong negative ad buy when Crist hopped in the race in November.

So, all told, Scott has edged Crist 67-33 percent in sustained ad spending. The 60-40 percent Scott-Crist ratio for increased ad spending this week shows the Democrat was greatly reducing the margin until Scott made his "investment" of an as-yet-undisclosed sum.

The exact totals are unclear. Add in a few million in buying we might have missed (yes, these are the error margins we’re talking about) and it’s easily a $100 million TV ad race.

And there are 11 days left.

Some graphs of the major media markets: 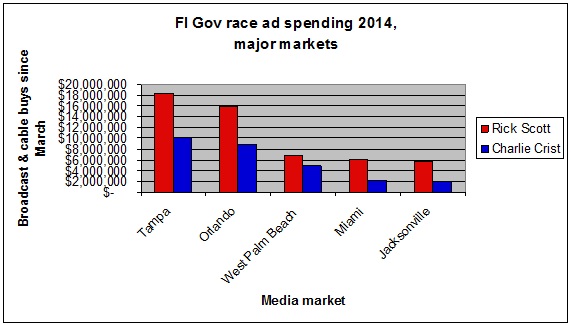 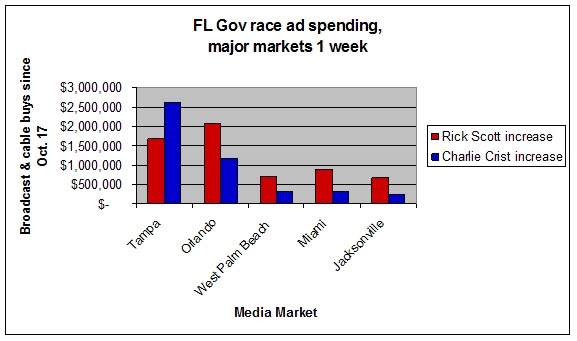