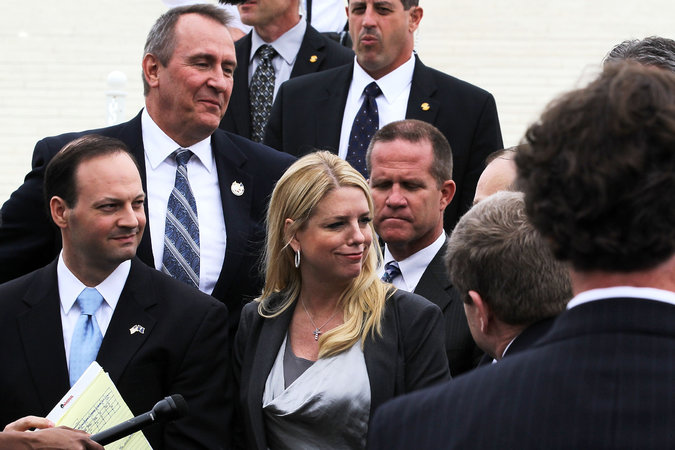 What Times' reporter Eric Lipton discovered is that unlike other elected officials, there are few rules regulating lobbyist access to the people who are supposed to be serving as "the people's lawyers" responsible for consumer protection.

Lipton found a treasure trove of e-mails that showed much of the lobbying and deal-making occur far outside of the public's view, and often in ritzy hotels on trips paid for by taxpayers or groups like the Republican Attorneys General Association.

Florida Attorney General Pam Bondi, who is not known for aggressively going after corporate fraud, plays a staring role in the piece. Lipton takes a look at how the law firm Dickstein Shapiro courted Bondi as she dropped suits or declined to investigate cases involving its clients, such as Accretive Health, a Chicago-based hospital bill collection company shut down by the Minnesota AG; Bridgepoint Education, a for-profit online school that the Iowa AG, Tom Miller, said had engaged in "unconscionable sales practices"; Herbalife,which had been investigated by federal and state authorities; and online reservation companies, including Travelocity and Priceline, on allegations that they were improperly withholding taxes on hotel rooms booked in the state.

A 2011 letter from St. Petersburg Mayor Rick Kriseman's urged Bondi to pursue action on behalf of residents, but to no avail. Bondi's office, as Dickstein had argued, concluded that state tax law was ambiguous, even as other Florida counties have decided to pursue the cases.

Lipton the shows how Dickstein's lawyers arranged to a splashy cover article of Bondi for InsideCounsel magazine, which is distributed to corporate lawyers. The firm also helped sponsor a fundraiser at Mar-a-Lago Club in Palm Beach, owned by Donald Trump. Last year, Bondi accepted $25,000 from Trump three days after a spokeswoman in her office said she was reviewing a complaint against Trump's for-profit schools by the New York attorney general. Although there have been complaints about the school in Florida, Bondi hasn't filed any action against Trump.

Bondi told Lipton that none of her interactions with Dickstein or any other special interest has "any bearing on my efforts to protect Floridians."