« For Charlie Crist, the fan is a mainstay | Main | Charlie Crist broke rules by insisting on fans, debate organizers say » 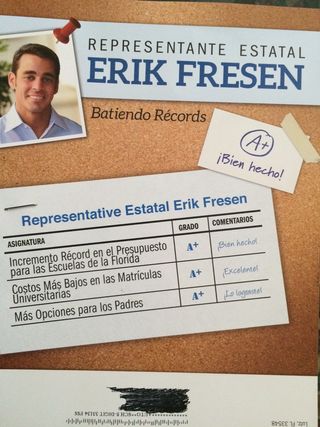 School voucher supporters said they would get involved in Florida statehouse races this year -- and they are deliving on that promise.

Here's how the Federation describes its work: "We identify election circumstances in which there is a discernible difference between the candidates on the issues of parental choice and education reform, regardless of any other factor, especially party affiliation. We then engage in electioneering communications to voters throughout Florida, making them aware of candidates and their positions on issues of the day."

Since July, the Florida Federation has spent more than $827,000 on political races, records show.

Some of that spending has targeted statehouse races.

Fresen, who oversees the education spending for the House, is in a tight race against Democrat Daisy Baez and independent Ross Hancock. Both Baez and Hancock have made their support for public schools a central focus of their respective campaigns.

That's not all. Kirtley has also made good on his promise to get involved in school board races.

The Federation took an interest in school boards after the Florida School Boards Association filed a lawsuit challenging the voucher program.

Kirtley said he already helped unseat two school board members who who serve on the FSBA in the August primary. His political organization is now throwing its support behind John Hill, who is hoping to serve on the Volusia County School Board.