Rick Scott gets Twitter shoutout - and photo! - from Mr. 305 himself: Pitbull

Looks like Florida Gov. Rick Scott wasn't the biggest name at his Republican fundraiser at the Biltmore Hotel in Coral Gables on Friday.

That distinction apparently goes to Miami native Armando Christian Pérez -- better known as Pitbull -- who on posted to his Twitter account (@pitbull) a photo with the guv, Lieutenant Gov. Carlos Lopez-Cantera and state Rep. Erik Fresen.

He also attached a photo that -- let's be honest -- could be far more persuasive campaign-flier art for voters who may not be into politics but may be into Pitbull's signature brand of Latin pop. (¡Dale!) 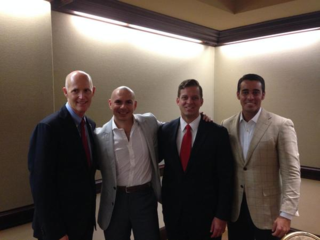