Scary thought for candidates: Fundraising gates shut at midnight. Here's what we know 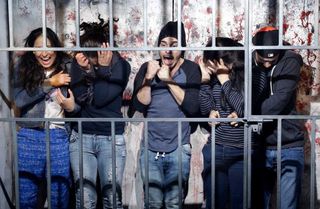 If there had been a sound associated with the end of the campaign finance season it would be that. At midnight Thursday, the gates closed on what has been the most expensive political season in Florida history.

Have citizens united to rejoice yet?

They should. Donors can't be haunted by fundraising calls from the candidates and their surrogates any more and, in four days, the public will see the end to the incessant bloodletting of the television ad war.

What have we learned so far?

Through Monday, $206 million had been raised in state campaigns this election cycle, more than half of it on the race for governor.

If that fact is not enough to scare you about the fate of union, consider this: the poor accountants at the Republican Party of Florida and Florida Democratic Party have until midnight tonight, yes Halloween, to compile their reports detailing how much they raised and spent in the last three months. Talk about turning into a zombie.

We also know that Scott’s political committee, Let’s Get to Work, raised a whopping $45.7 million while Crist’s raised a stunning $30 million through Wednesday.

Think about it. We thought it was a big deal when Crist raised $24.6 million to get elected in 2006 -- as a Republican. Now, as a Democrat, his political committee has topped that. He is expected to top the $43 million raised by the Democrats four years ago for Alex Sink, who lost to Scott by 62,000 votes -- and Scott's $85 million.

As expected, the fundraising continued into the final week. Crist’s political committee raised $624,000 through Monday, most of it from lawyers going back to the well.

Scott’s Let’s Get to Work committee would have been dry this week if it hadn’t been for the Republican Governor’s Association stoking another check for $500,000 into the campaign. The RGA total: $18.3 million.

Both candidates have steered much of their money to the political parties, which gets better rates on the massive television ads the candidates have financed. Those numbers are due at midnight.

Another take-away: the Senate race for president in 2016 has bitterly divided the GOP. We're even watching traditional GOP backers like Disney steering money to the Democratic Party in the hopes of perhaps defeating some of the pro-casino advocates, like former Sen. Ellyn Bogdanoff, and protecting incumbent Democratic Sen. Maria Sachs who faces Bogdanoff in Broward.

More to come. We'll be digging into the crypt for more details.

Photo: Courtesy of the Associated Press