« PolitiFact's guide to final Crist vs. Scott debate | Main | With Charlie Crist outraising him, Rick Scott says he 'might' self-fund after saying he wouldn’t »

Scott and Crist: beyond the rhetoric, here's where they stand on the issues 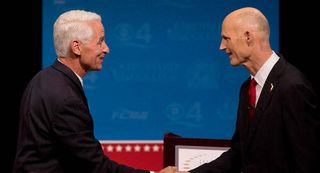 Florida’s race for governor may be one of the nastiest on record as candidates shout it out in more than $83 million in television ads, but beneath the rhetoric is a record of real differences between Gov. Rick Scott, the Republican, and his predecessor and challenger, former Gov. Charlie Crist, the Democrat.

For all our election coverage, keep the Miami Herald's Voters Guide page handy.