Gov. Rick Scott is planning to be a no-show Friday for a video-taped deposition in a lawsuit he filed in California to block the release of information about Google email accounts used by him and his executive staff.

Attorney Steven R. Andrews was prepared to put the governor under oath in Tallahassee but Scott’s communications director, Frank Collins, said Thursday “there is not going to be a deposition tomorrow.” Scott's lawyers asked the judge to quash the deposition but, as of late Thursday, they hadn't received an answer. 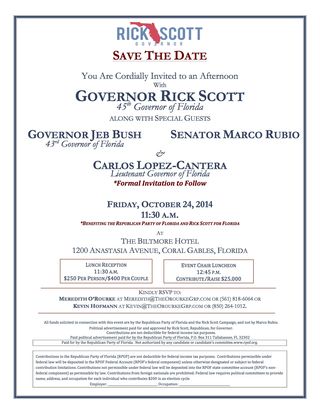 However, if the governor is a no-show for a deposition in a case he initiated, it may not be without consequences.

According to California's rules of civil procedure, the governor must submit to the deposition Friday unless he has received the court's permission to change the date, said Walter Clark, a trial lawyer who practices in Southern California.

If Scott fails to submit to the deposition, the judge could hold him in contempt and make him pay damages, according to California law.

"You can’t just not show up at a deposition and say we’ll talk about it later,'' Clark said. "You have to ask a court for relief."

The governor filed the lawsuit in September in a Santa Clara County court in an attempt to prevent Google from releasing information on who and when the private G-mail accounts used by Scott and two staff aides were created.

Andrews alleges that Scott set up the gov.rls@gmail.com account to circumvent the state’s public records law. When the governor refused to turn over the information, Andrews got a Tallahassee court to approve a subpoena to seek the information from Google. Circuit Court Judge Charles A. Francis also ordered the governor to stop fighting the request.

The subpoena asks Google to turn over documents that show when the G-mail accounts were created, who created them, and which computers, such as state computers, were used. Andrews has also scheduled depositions for next week for two of Scott's former aides, Brad Peipenbink and Sarah Hansford, to counter the lawsuit against the subpoena.

Scott campaign spokesman Greg Blair said the deposition was never on the governor's calendar because "a deposition is not scheduled just because Steven Andrews taps his heels and tries to make it so. All sides have to agree to a date before saying it is 'scheduled.'"

Andrews disagreed and pointed to the California law that requires the governor to seek a court's permission to stop the deposition.

”Rick Scott doesn’t respect the law of Florida, so why should he respect California law?,'' Andrews said. "To get depos from guys like him, you normally have to file five motions and defend an appeal to get him in the witness chair.  So I guess I am saying I am not surprised he is not showing up.  Let’s face it, he sued me in California and is dodging his deposition. Typical.”

Don Hinkle, a Tallahassee lawyer who is not involved in the case but who has lent his offices for the deposition said it appeared that governor was "taking the 5th amendment in a lawsuit he filed.”

According to the governor’s schedule, Scott has no plans to be in Tallahassee as he continues his summer-long re-election campaign with a multi-city bus tour scheduled through the next week.

“Obviously the governor’s got his own private counsel and I did speak with [Scott’s general counsel] Pete Antonacci and there is not going to be a deposition tomorrow and that’s all I got for you,’’ Collins said.

Andrews has been in a legal feud with the governor for more than two years. His complaint initially began over a dispute over property near the governor’s mansion but became a public records challenge when Andrews allegedly uncovered evidence that the governor’s office was altering calendars and withholding documents related to his case, in violation of the state’s public records laws.