« 'We've got to get our votes out,' Rick Scott tells Republicans in Doral | Main | Doral mayor praises Rick Scott as fellow "Christian" »

Scott says he will write his campaign a personal check, after all, but won't say how much 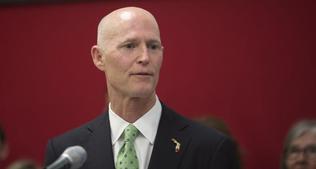 With less than two weeks before Election Day, Gov. Rick Scott acknowledged Wednesday that he will write a personal check to the Republican Party of Florida to fund his campaign.

In an interview to air Sunday on CBS4’s Facing South Florida with Jim DeFede, Scott told DeFede he "will be investing" in the campaign that has already spent more than $83 million, but he refused to say how much he or his family will spend.

"We’ll put our report out at the end of the month,'' Scott said, responding that they haven't determined the amount.

The acknowledgement that Florida's millionaire governor is prepared to self-fund a fraction of his spending is a sign that the too-close-to-call race may have tapped out the governor's prodigious fundraising machine. Until last week, Scott's Let's Get to Work Committee had been consistently raising more than Charle Crist's political committee but the numbers switched earlier this month and last week Crist reported out-raising Scott six to one.

Last week, rumors surfaced that Scott was prepared to plow as much as $22 million of his fortunes into the campaign to keep his job.

Scott told DeFede that tapping his personal fortunes was necessary to offset the more than $12 million being pumped into Crist's campaign from California billionaire Tom Steyer.

Steyer's NextGen Climate political committee has launched an aggressive television assault on Scott, criticizing his administration's handling of oil drilling in the Everglades, the nuclear fees charged by Duke Energy, and Scott's strong support by the utility industry.

"I’ll be investing,'' Scott told DeFede. "It’ll be a fraction of what we’ve raised. We’ve had great fundraising but I’ve got to offset this smear campaign by this left-wing radical billionaire that’s friends of Charlie out of California."

Two years ago, Scottwas clear about relying on his personal fortunes to fund his reelection campaign: “I won’t have to,” he said at the time.

His change of heart would not be the first time Scott has self-financed his campaign. In his 2010 campaign for governor, when he ran his first campaign for public office, he poured $75.1 million of his own money into the race and won by a narrow 62,000 votes.

A new Quinnipiac University poll out on Wednesday showed that Scott and Crist remain in a dead heat, despite Scott outspending Crist more than two to one on television ads -- $56.5 million by Scott compared to $26.5 million by Crist.

Scott reports that his net worth is $132.5 million, according to financial disclosure forms  filed with the Department of State. However, as the Herald/Times has reported, the governor does not count assets that are held by trusts in his wife or family's name, even though federal securities documents show that he may be the beneficiary and principal owner of stocks in those funds.

Democratic candidate for Attorney General George Sheldon is suing Scott for failing to file a complete disclosure form as required by the Florida Constitution. No hearing has been set yet on the issue.