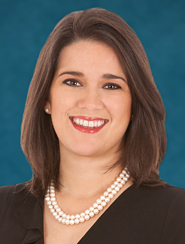 The Miami-Dade Legislative Delegation has a new leader.

"My goal is for us to speak with as unified a voice as possible," she said.

Flores said she plans to concentrate on issues that affect all of Miami-Dade County, including transportation, education and infrastructure. She will also work to ensure Miami-Dade projects receive funding.

"We've had a great track record the past couple of years," she said. "I'm hopeful we'll continue in that direction."

Flores, who has served in the Legislature since 2004 and works as the president of Doral College, won the unanimous support of her colleagues.

Sen. Oscar Braynon, D-Miami, said he expects her to reach across party lines.

"She always been inclusive of me, Dwight [Bullard] and Gwen [Margolis]," he said, naming the other Senate Democrats from Miami-Dade. "I'm happy to have someone from our Senate group to spread the unity to our entire delegation."

Flores replaces former Rep. Eddy Gonzalez, R-Hialeah, who could not seek re-election due to term limits.

The 24-member delegation from Miami-Dade is the largest in the state.