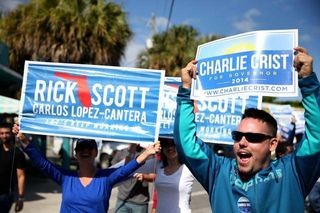 It’s now official: This year’s state elections are the costliest in Florida history, and the nation’s most expensive.

Republican and Democratic candidates for statewide and legislative offices and their political parties in the 2014 election cycle raised a staggering $345 million, according to a preliminary analysis by the Herald/Times and the Washington-based Center for Responsive Politics.

Campaign finance reports filed with the Florida Division of Elections by Friday’s deadline show that huge contributions from out-of-state mega donors helped to make 2014 the most expensive Florida governor’s race on record. The Center For Responsive Politics has concluded that, as a result, Florida has the most expensive mid-term election in the nation.

As voters head to the polls Tuesday, the infusion of big checks from deep pockets increases voter disenchantment, she said. “The average person says: ‘When this money is gushing in to the political system why should I get involved?’ They see the message is all about tearing down, not building up, and they tune it out.”

The flood of cash helped to fuel unprecedented spending on a barrage of mostly-negative television ads. Records show that Republican Gov. Rick Scott and Democrat Charlie Crist have spent at least $104 million on television alone, saturating the airwaves at an unprecedented rate. Story here.