Joe Biden to Miami Hispanics: 'This is your election' 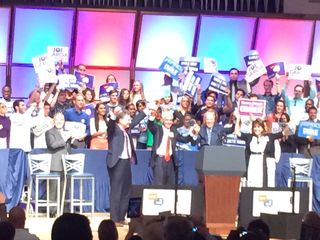 Democrats welcomed Joe Biden -- or rather, José Biden, as he was introduced by U.S. Rep. Joe Garcia -- to Miami on Sunday as part of a final appeal to voters to go to the polls Sunday and cast their ballots for Garcia for Congress and Charlie Crist for governor.

The vice president held court, speaking at length in an appeal to Hispanics and the middle class. He received the most applause when he referred to Republican Gov. Rick Scott.

"He says when asked about climate change, 'I'm not a scientist.' But he sure as hell thinks he's a doctor when he tells women what to do," Biden said.

The crowd was enthusiastic, though the 200 or so people did not fill the auditorium at Florida International University. The intended audience, though, were voters watching TV at home.

There weren't enough chairs to go around when the politicians walked on stage. So Biden, after initially sitting down, gave up his seat to Crist's wife, Carole. He joked with supporters behind him and played up the personal anecdotes when he took the microphone.

Hispanics, Biden said, could determine this and future national elections if they vote in proportion to the size of their population.

"This is your election," he said. "This is an election that I believe if you do what I expect you to do that they'll be writing about two years from now, five years from now, 10 years from now. This will be the election, if the community stands up, where we start to say, 'The outcome of every future election in America will be fundamentally impacted upon by the Hispanic community.'"

Crist was brief. "Let me be very clear: I am asking for your vote," he said (as if there had been any doubt). He asked the audience how many had already voted.

"Muy bien!" he praised in Spanish when most raised their hands. But then he asked them to make sure their friends and family did the same. "The turnout in Miami-Dade County is incredibly important."

Scott was slated to attend a Hialeah event with former Florida Gov. Jeb Bush in another appeal to local Hispanics.

Garcia, who represents the swing 26th congressional district and is running against Republican Carlos Curbelo, cast his as a high-stakes race because of the millions of dollars outside groups have spent against him.

"Two guys from Kansas are throwing millions of dollars in this race," Garcia said, referring to billionaire industrialist brothers Charles and David Koch. "They're against raising the minimum wage. They want to repeal Obamacare. These are climate-change deniers. They don't give a damn if South Florida sinks under a rising sea."

In a statement, a Curbelo spokesman suggested campaigning with the vice president was a desperate strategy by Garcia in the close race.

"As Vice President Joe Biden takes the stage today, scandal-plagued Joe Garcia will be praying and hoping that his last-minute pivot back into the arms of the White House will hide the fact that his campaign is under federal criminal investigation," Wadi Gaitan said.