Christie is chairman of the Republican Governors Association, which raised $18 million in support of Scott's re-election in the nation's most important swing state in presidential elections. Perry's relationship with Scott is more personal: They've gone on a fishing expedition together in Destin and have shared a good-natured competition over job creation for the past four years. Both governors also stumped for Scott in Florida in the fall campaign.

Christie and Perry are both seen as potential White House aspirants in 2016. Christie was recently the subject of a front-page New York Times article that focused on how his extensive out-of-state travel has begun to aggravate his New Jersey constituents. And wait until Perry discovers that in Tallahassee, what passes for down-home barbecue can only be found at Sonny's.

Scott issued a proclamation on the subject Monday.

The following day, he enlisted the help of state Education Commissioner Pam Stewart.

"Throughout the week, I invite you to join me in encouraging Florida's superintendents, community partners, parents, and students to take time out of their day to show first responders and their families how much we value their service to our cities, counties, and state," he wrote.

Tarpon Springs Police Officer Charles Kondek was killed in a Dec. 21 gun battle with an ex-convict. His funeral was held Saturday.

The shooting occured amid a national dialogue on the use of police force, sparked by the deaths of Michael Brown and Eric Garner. Brown was shot and killed by police in Missouri. Garner died in police custody in New York.

The deaths prompted protests across the country. One man who had posted anti-police messages on social media ambushed two New York City police officers in their patrol car on Dec. 20, killing them both before taking his own life.

Publix says gay and lesbian couples will be eligible for insurance 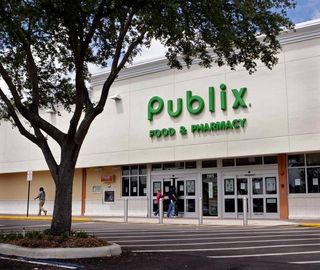 Days before same-sex marriage is due to become legal in Florida, Publix has told employees that gay and lesbian couples legally married elsewhere will be eligible Thursday for group health and other insurance.

“Beginning Jan. 1, 2015, Publix is expanding spouse coverage for its health, dental and vision benefit plans to associates who are married in any state where same-sex marriages are legal, regardless of the associates’ state of residence,” reads an internal memo from the supermarket company’s corporate communications department. “Publix’s benefit plans offer coverage to legal spouses, and until recently, the states in which Publix operates did not recognize same-sex marriages as legal unions.”

Until now, Publix did not offer insurance benefits for same-sex couples, legally married or not. “The majority of the total Fortune 500 — 66 percent — offer equivalent medical benefits between spouses and partners,” according to the nation’s leading LGBT-rights lobbying group, Washington, D.C.-based Human Rights Campaign (HRC).

On Tuesday, the conservative Orlando-based Florida Family Association sued all three for “their intentions to defy Florida law and either issue same-sex marriage licenses or officiate over same-sex marriage ceremonies on or after January 6, 2015.”

In its filing, the Florida Family Association cited a memo from law firm Greenberg Traurig to the state clerks’ association, which has caused confusion throughout Florida as to who must abide by Hinkle’s order. The Washington County clerk, named in the federal suit, last week asked Hinkle for clarification. The judge then ordered other defendants in the case, and Bondi, to respond to him by the end of the day on Monday.

A judge on Tuesday dismissed one of two lawsuits aimed at Florida's controversial school voucher program.

The suit challenged the 2014 expansion of a program that provides private-school scholarships for low-income children. It also threatened a new program creating scholarships for children with special needs.

A second lawsuit, which is still pending, alleges the voucher program conflicts with the state Constitution.

Both are being driven by the statewide teachers union.

Leon County Circuit Court Judge Charles Francis had already dismissed the first challenge, saying the teacher named as the plaintiff did not have legal standing. But the lawsuit was amended to include three parents with children in public schools.

On Tuesday, Francis said the new complaint lacked "a legally sufficient basis to sustain a finding of special injury."

He added: "The Court is of the opinion that further amendments to the complaint will not result in a legally sufficient complaint."

Fedrick Ingram, president of United Teachers of Dade, said the dismissal will only push teachers to work harder for change in Tallahassee when the legislative session starts in March.

"We will do what’s necessary to continue fighting on behalf of the public interest," he said. "It's a slight setback, but we are not deterred."

But supporters of the voucher program hope Tuesday’s ruling foreshadows a victory in the remaining lawsuit.

"On behalf of the families using Tax Credit Scholarships and PLSA accounts, we are thankful that Chief Judge Francis dismissed the challenge to SB850 – holding the unions had no standing to challenge that bill – especially since this ruling supports the argument that the union also has no standing to challenge the tax credit scholarship program in the [other] case," said Daniel Woodring, an attorney representing scholarship parents.

With a second term for Rick Scott, PolitiFact will track 20 new promises on our Scott-O-Meter

If his campaign promises are any indication, Florida is getting a different Gov. Rick Scott in 2015 than the one it got in 2011.

In 2010, Rick Scott ran on a platform of growing jobs, downsizing government, drug testing welfare recipients and cracking down on illegal immigration. In 2014, he still made job growth his mantra and promised more tax cuts, but Scott also highlighted softer goals of improving education and the environment.

While PolitiFact Florida is still tracking Scott’s first-term promises -- including the outcomes ofpromises about his 7-7-7 Plan to implement a seven-point economic plan to create (by Scott’s own count) 1.7 million jobs over seven years -- it’s time for an update. Scott will be sworn in for a second term on Jan. 6, so we are adding 20 promises to the Scott-O-Meter.

During Scott’s first term, we tracked 57 promises, rating 24 as Promise Kept, 15 asPromise Broken and 11 as Compromise. Another five are In the Works and two areStalled.

Turn to PolitiFact Florida for the rest of our story about Scott's second term promises.

The torrent of many of the distortions and half-truths in the state’s top election battles this year had roots in South Florida.

In 2014, Miami-Dade was home to both of Gov. Rick Scott’s and Democrat Charlie Crist’s running mates, the scene of a closely-watched Congressional battle and ground zero for national conversations about climate change and Cuba.

And that left-leaning county to the north, Broward County, is home to one of the top critics of the GOP: DNC chair U.S. Rep. Debbie Wasserman Schultz.

Here’s a look back at some of PolitiFact Florida's South Florida fact-checks in 2014.

Support for Common Core could cost Jeb Bush in primary

Jeb Bush never wavered in his support for the Common Core state standards — not even after the education benchmarks became a target for Tea Party groups decrying federal overreach in education.

That may hurt the former Florida governor, who has said he is considering a run for the White House.

Bush would find himself in a crowded field of Republican candidates, some of whom — along with ardent conservatives nationwide — have stepped up their attacks on the Common Core.

Speaking this week on Fox News Sunday, conservative syndicated columnist George Will said Bush has "four strikes against him — Common Core, immigration, his name and the big sign on his back that says establishment choice."

Posted by Kathleen McGrory at 10:54 AM in Education, Jeb Bush | Permalink | Comments

Miami Beach police chief refused interview in an email. Then his email was leaked

Miami Beach Police Chief Dan Oates refused an interview this week with Miami New Times reporter Michael Miller because the chief believed Miller had already made up his mind about a story and was not giving him enough time for a proper response.

Then the chief emailed his staff, telling officers to keep the issue in-house and refrain from sending emails about it, since they can become public record.

“I encourage you to talk to me about it. No emails, please. Stop by and see me in the office or call Tricia and she’ll arrange for us to talk by phone,” he wrote.

Miller sent Oates a lengthy email Monday explaining he was working on a project involving the use of Tasers in several police departments. He asked the chief to respond to specific Beach incidents.

Tuesday morning, Oates responded, declining to be interviewed. An investigation into the death of graffiti artist Israel Hernandez is still ongoing, said Oates, who told Miller his request for a response by Friday was “unreasonable” and said the reporter’s email “implies that you have already rendered judgment.”

“Mike is in no way biased,” Strouse said. And the story, he added, “is solid as hell.”

Oates did not respond to an email requesting comment.

"Tens of thousands of e-mails from Bush’s eight-year gubernatorial tenure  underscores two constants present from the beginning of his political career: the challenges he faced with conservatives in his own party and an intense, detail-oriented engagement as an executive."

The polling is in: Cuban exile hardliners and Republicans are in the clear minority nationwide when it comes to the embargo and reestablishing ties with the island nation.

But there’s one aspect of U.S. Cuba policy that Cuban-Americans, rank-and-file Republicans nationwide and Americans in general agree on: Easing travel restrictions to the island.

The surveys are unwelcome — but not unexpected news — to embargo supporters, mostly centered in South Florida where two potential presidential candidates, former Gov. Jeb Bush and U.S. Sen. Marco Rubio, have been outspoken about strengthening the embargo.

“We’ve found that the more information people learn about what happens in Cuba, the more they are to support U.S. policy,” said Mauricio Claver-Carone, executive director of the U.S.-Cuba Democracy PAC, the nation’s premier political action committee that supports the exile community.

“That’s always been the challenge: Informing people,” Claver-Carone said. “We’re a small community, yes, but we have a big megaphone.”

And in America at large, Republicans’ and the Cuban-American community’s attitudes about Cuba policy are decidedly in the minority, according to a comparison of national polls from CNN/ORC International, Langer Research/ABC-Washington Post, Reuters/Ipsos, CBS and a Bendixen & Amandi International survey conducted last week for The Miami Herald, El Nuevo Herald and the Tampa Bay Times.....

ABC/Langer: Americans back it 64-31 percent; while the GOP is split 49-47 percent. “Very conservative” respondents’ support was lacking, 36-61 percent.

Reuters/Ipsos: Americans back it 45-22 percent, while GOP support is 31-38 percent. Reuters is the only online survey.

CBS: Americans back it 54-28 percent. CBS did not provide political party data. All the national polls surveyed about 1,000 people and have an error margin of 3.5 percentage points. The Republican polling numbers have a larger error margin.

CNN/ORC: Americans want them changed, 67-32 percent, with Republicans at 58-40 percent.