That is, 101,807 fewer people voted for the amendment than governor.

Smith wrote his analysis in response to yesterday's Miami Herald story (here) about the resurrection of the amendment. This is from Smith's Election Smith blog:

As this Figure [reproduced below] reveals, support for Amendment (Yellow line) was fairly strong across the state of Florida (it only dipped below 50% in 15 mostly rural counties). The big problem for Morgan and his campaign consultants was ballot roll-off, that is, voters who cast ballots in the gubernatorial race for Democrat Charile Crist (Blue line), but who didn’t vote for legalizing medical marijuana.  Support for Crist in Broward county, for example, topped 70%, and support for Amendment 2 was nearly as high.  The down-ballot roll-off on Amendment 2, however, was 5.3%. Crist tallied 17,000 more votes than Morgan’s Amendment 2 in Broward.  In Miami-Dade county, Crist out-polled Amendment 2 by more than 28,000 votes, as roll-off was 6.7% in the populous South Florida county.  Amendment 2 failed to achieve 60% in Miami-Dade not because of poor turnout, but because of the high roll-off among Crist supporters.  Across the state, roll-off on Amendment 2 was by far the greatest in Broward and Miami-Dade, strongholds for Democrats and support for the legalization of medical marijuana.

What's interesting about the Miami-Dade and Broward numbers is how it indicates the affect of big money in the race. In the closing days of the campaign, the medical-marijuana opponents, Drug Free Florida, saturated the Miami-Fort Lauderdale market with negative TV ads. Drug Free also hired Javier Correoso, a Republican Cuban-American, to reach out to that demographic in Miami-Dade (where Cuban-Americans account for roughly 72 percent of registered Republicans). People United for Medical Marijuana couldn't afford to keep up and didn't advertise in the market at all.

Overall, Drug Free Florida outspent People United by about 3 to 1 on TV. And the amendment still got 57.6 percent of the vote. But it failed because it didn't meet the 60 percent voter-approval threshhold. 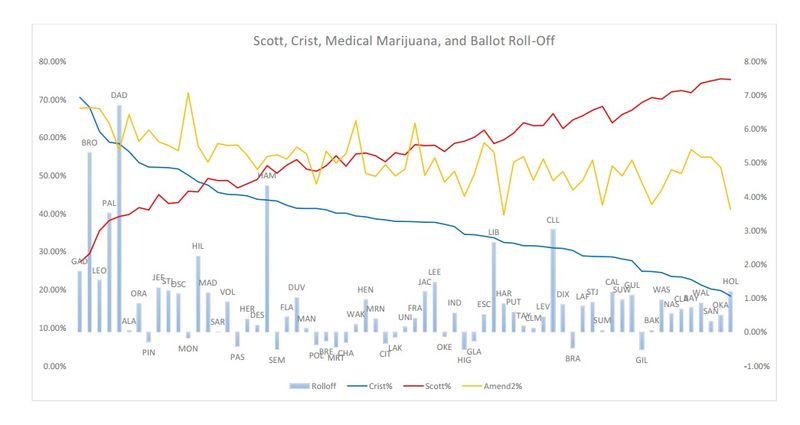