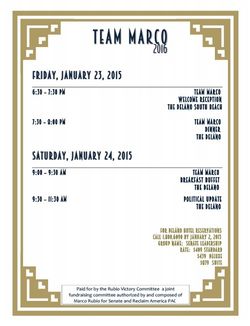 In another sign of his White House ambitions, Sen. Marco Rubio hosts an election-strategy powwow today at the Delano Hotel with a finance team that looks like a presidential campaign-in-waiting.

None of the new major financiers of "Team Marco 2016" has deep Florida ties, a sign that his re-election for his Florida U.S. Senate seat in 2016 is looking more toward Pennsylvania Avenue.

Wayne Berman: a top advisor to the Blackstone Group and Republican Jewish Coalition, the New York resident has held a variety of posts and transition team spots affiliated with eight GOP presidential campaigns, from Ronald Reagan in 1981 to George W. Bush in 2000.

We'll see who shows up today and tomorrow. But just from the few names that have dribbled out, it's a safe to guess that Rubio's not just going through the motions to make it look as if he wants to sell his latest book (yes, campaigns help sell books and vice-versa). Rubio will more than likely run for president -- but when and for how long are two unanswered questions.