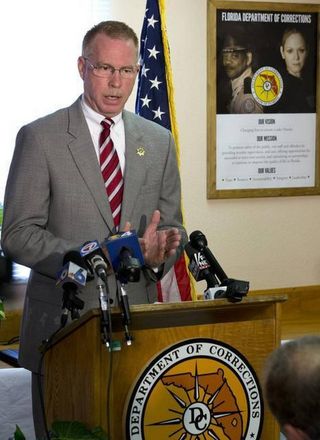 It was July 10, 2014. Mike Crews, then-secretary of the Florida Department of Corrections, was in the thick of a public firestorm over allegations that a mentally ill inmate had died in a scalding shower as part of a punishment ritual by officers at Dade Correctional Institution.

Crews, a former law enforcement officer who had been at the helm of the state’s largest agency for close to three years, had been fielding calls from the governor’s office for weeks. Each message seemed more urgent than the last, with Gov. Rick Scott’s re-election campaign in full swing and civil rights groups calling for a U.S. Justice Department investigation into a series of questionable prison deaths.

“We need you to take a bullet for the governor,’’ Crews recalled being told by the governor’s chief of staff, Adam Hollingsworth, as he was driving home that afternoon from North Carolina, where and he and his wife had spent a few days decompressing.

The former prisons chief, in an exclusive interview with the Miami Herald, said the governor’s office asked him to fire people Crews didn’t believe should fired; it wrote press releases that said things he didn’t say, and orchestrated hastily arranged news conferences that were little more than smokescreens designed to distract from the real crisis that Crews was sounding the alarm on for years: Florida’s prisons were so rundown and understaffed that they had become dangerous.

“I guess you can say they were more concerned with the crafting and writing of news releases and that had little to do with the reality of what needed to be done to keep the institutions safe and secure,’’ Crews said of the governor’s office. Story here.