« Meggs: Cabinet members should investigate FDLE themselves or shutup | Main | Sobel doubts ability of admnistration to do transparent review of child deaths » 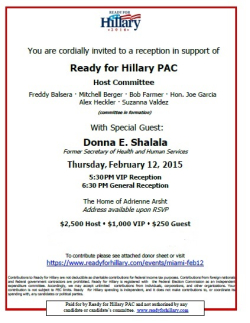 Is Miami ready for Hillary Clinton?

The Ready for Hillary PAC is about to find out Feb. 12, when the political committee holds its first major South Florida fundraiser.

This is only the beginning of the 2016 fundraising season, so expect more because Miami-Dade has some of the deepest pockets for Florida fundraisers, making it a regular stop on the political money-grubbing circuit.

The Miami fundraiser has an added dose of political interest because it’s being held in the home county of potential Hillary Clinton rivals, former Gov. Jeb Bush and U.S. Sen. Marco Rubio.

As the state’s most-populous and most-Hispanic county, Miami-Dade is also one of the most hotly contested, although it has trended more and more Democrat in recent years. Bush is the only Republican in at least 15 years who has one a majority of the vote in Miami-Dade County (53 percent in 2002). Rubio in his 2010 bid for Senate won the county with 43 percent of the vote, but that’s partly because then-U.S. Rep. Kendrick Meek and then-independent Gov. Charlie Crist.

Last year as a Democrat, Crist won a greater share of the Miami-Dade vote in his failed bid for governor, 58 percent. But in raw votes (541,000) and in percentage terms (62 percent), President Obama in 2012 firmly established Miami-Dade as a Democratic bulwark.

With margins like that, it’s not easy to see how Bush or Rubio could beat Clinton in their home county. But both speak Spanish, unlike Clinton and unlike 2012 GOP nominee Mitt Romney.

Romney lost the county by more votes (208,459) than any other recent Republican candidate. That margin helped cost Romney must-win Florida and, therefore, the White House. Romney's hardline positions on immigration likely helped cost him a significant portion of the Hispanic vote, the state and nation's fastest growing major demographic that promises to be even more influential in 2016.

So it's a good bet that Miami, and perhaps Florida, is far less likely ready for Mitt than Hillary