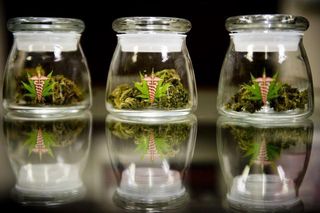 Making good on his promise to file another constitutional amendment to legalize medical marijuana, Orlando attorney John Morgan on Thursday filed a revised version of his original proposal with the Florida Secretary of State's office.

Morgan, who spearheaded the constitutional amendment that won 58 percent of the vote in November, said the new amendment "is essentially the same amendment with clarifications." (Here's full story with side-by-side analysis.)

If he collects enough signatures, and wins court approval, it will be on the 2016 presidential ballot.

The original Amendment 2 failed to become law despite collecting a majority of votes because it fell short of the 60 percent threshold needed for constitutional initiatives in Florida.

Morgan told the Herald/Times he would prefer that the issue be addressed by the Legislature, so that it is not embedded into the state Constitution, but because lawmakers have not shown a desire to act he will make one more try.

"After this, I'll never do this again,'' Morgan told the Herald/Times. "The lesson in playing big is you set yourself up to lose big and losing big gives you humility and perspective that I didn't have when I was trying to find my way in the woods on this the first time."

Among the lessons learned, he said: "A lot of it was about me and it should be less about me and more about the patients." He said he also wrongly assumed the first time that if he got young voters out to the polls to vote for the amendment, it would pass. "But they didn't come out to vote,'' he said.

Meanwhile, Amendment 2 lost the greatest share of voters among those 65 and older and they are "the people most likely to benefit,'' he said.

Morgan said he will now turn his focus to educating older people about "how bad prescription drugs can be for you" and how medical marijuana can be a safe alternative. He said that after a career as a medical malpractice lawyer, earning millions suing pharmaceutical companies for hurting patients, he believes that everybody with a medical condition that could benefit from marijuana "should be able to get marijuana."

Morgan said the revised amendment, to be posted later today on the Secretary of State's web site, make four significant changes to the original version:

* Adds clarifying language that the Department of Health must verify parental consent before a doctor proscribes marijuana to a minor;

* Clarifies that doctors who proscribe marijuana cannot be arrested for proscribing marijuana but they are not immune to prosecution for negligence or malpractice;

* Clarifies that the Department of Health must establish quality standards for caregivers.

The next step, he said, is to raise money and collect signatures, starting with the more than 600,000 who signed it the first time.

"Amendment 2 received half a million more votes than Rick Scott, more than any candidate on the statewide ballot, and the Supreme Court has seen this movie before,'' Morgan said. "We learned a lot, but we're ready to go."

Meanwhile, the odds remain slim that the Legislature will take up a medical marijuana proposal that goes beyond the low-THC law they approved last year.

"It's always best to learn to ride with the training wheels on,'' said Rep. Matt Gaetz, R-Shalimar, one of the authors of the Compassionate Medical Cannibis Act passed last year.

He said legislators will decide first how effective the structure is they have already established to cultivate and distribute of non-euphoric cannibis before deciding whether they should broaden the law. That process, which was scheduled to be begun by Jan. 1, has already been delayed because of legal wrangling and rules challenges between the state and prospective growers.

Since the passage of the amendment, a cottage industry of lobbyists, growers and consultants have emerged who also want the legislature to control the law, so that it can be updated and flexible.

"As research emerges over time on the effectiveness of the plant-based medicine for various illnesses, the law can be revised to meet the changing needs,'' said Taylor Biehl, a lobbyist and founder of the Medical Marijuana Business Assocation of Florida.