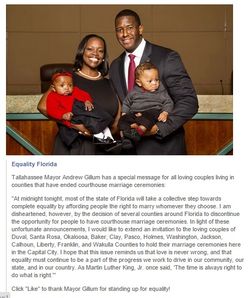 Andrew Gillum was a rising star in the Florida Democratic Party's otherwise-dim firmament even before the courts overturned the state's gay-marriage ban.

But the historic decision gave him a chance to shine politically. And he did.

While many other Democrats were silent, Gillum criticized surrounding conservative North Florida counties for refusing to perform any marriages in court houses because some of their clerks oppose gay marriage. Gillum invited the gay couples to Tallahassee to get married in Leon County instead.

This obviously won't win Gillum any conservative votes. But he's not a Republican. And his move is already winning the hearts of liberals and gay-rights groups such as Equality Florida, which posted his statement along with a picture of the mayor and his family:

"At midnight tonight, most of the state of Florida will take a collective step towards complete equality by affording people the right to marry whomever they choose. I am disheartened, however, by the decision of several counties around Florida to discontinue the opportunity for people to have courthouse marriage ceremonies. In light of these unfortunate announcements, I would like to extend an invitation to the loving couples of Duval, Santa Rosa, Okaloosa, Baker, Clay, Pasco, Holmes, Washington, Jackson, Calhoun, Liberty, Franklin, and Wakulla Counties to hold their marriage ceremonies here in the Capital City. I hope that this issue reminds us that love is never wrong, and that equality must continue to be a part of the progress we work to drive in our community, our state, and in our country. As Martin Luther King, Jr. once said, ‘The time is always right to do what is right.'"

The immediate politics aside, Gillum's advocacy for gay rights is also significant because of his race. African-Americans in 2008 were the most-likely racial/ethnic group to support Florida's gay-marriage ban, according to exit polls. The ban  passed with 62 percent of the vote. Non-Hispanic whites backed it 60-40 percent, Hispanics 64-36 percent and African-Americans 71-29 percent.