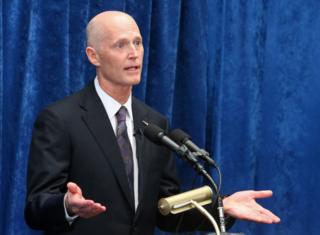 Florida Gov. Rick Scott speaks to the media during a news conference on Wednesday in Tallahassee. Associated Press

Gov. Rick Scott's office is now contradicting Attorney General Pam Bondi's assertions that staff, not the governor himself, were behind the forced resignation of the top Florida Department of Law Enforcement official.

The statement came in the form of an update to the governor's Frequently Asked Questions document on the subject of Gerald Bailey's ouster from FDLE -- a repository of answers to questions the office has been using rather than directly addressing them with reporters. Here's the text of the new question:

Q: Does Governor Scott agree that his staff decided to force Gerald Bailey to resign immediately without the Governor’s direct knowledge?

The statements come after remarks made by Bondi last Wednesday that she believed the governor was not aware that Bailey had been asked to resign until after it had happened.

"We all knew there were going to be changes made in the upcoming months, but did I know that Gerry Bailey was going to be told he was fired and have his things packed up, his entire life as a career law enforcement officer in a cardboard box, and be told to be out of the office before the end of the day? Absolutely not," she said. "Nor do I believe the governor knew it."

But, she said, this was based on her knowledge of Scott and the situation, not based on conversations with the governor, which would have been in violation of the Sunshine Law.

Until Monday morning, Scott's office had pointed to a different FAQ response, rather than commenting directly on the matter. That one reads: