In Miami-Dade County, a lobbyist's email prompts a spat

A tiff over the guest list for a big speech by Miami-Dade Mayor Carlos Gimenez has revealed a spat within his inner circle.

On Feb. 11, lobbyist Jorge Luis Lopez sent an email to clients and others on his mailing list announcing Gimenez’s upcoming State of the County address, a public event being held Thursday morning at Florida International University.

“As customary, I wanted to bring to your attention an important upcoming event in our community,” Lopez wrote. “The State of the County Address is open to the public.”

Lopez’s email included an RSVP option. When people clicked “I will be attending!” they were taken to an internal registration page controlled by his Coral Gables firm.

The email blast prompted Gimenez’s communications chief, Michael Hernández, to publicly question this week why Lopez was taking names for an event hosted by Miami-Dade’s mayor.

“No one authorized Jorge to send the invitation on behalf of the Office of the Mayor,” Hernández wrote in a statement to Naked Politics. “Jorge never requested authorization. Jorge is not a representative of Mayor Gimenez.”

Lopez pushed back Wednesday, noting he regularly sends out emails to clients about major county events, and has them RSVP to his firm so he can gauge interest and know who to look for.

He said he’s provided RSVP lists to the Gimenez’s office in the past and to prior administrations, and asked why no one from the mayor’s office objected when his email went out.

“Mr. Hernandez opened and read my email nearly two weeks ago but raised no concerns,” Lopez said in a statement, accompanied by a log from his online-marketing program showing the disputed email was sent to Hernandez and opened Feb. 11. “Mr. Hernandez lacks an ounce of credibility; and owes me a public apology!”

The dispute first surfaced in Nelson Horta’s blog, citing unnamed sources. Now the squabble has escalated into an on-the-record exchange between Hernandez, one of the mayor’s top political advisers, and Lopez, a lobbyist with longstanding ties to Gimenez. 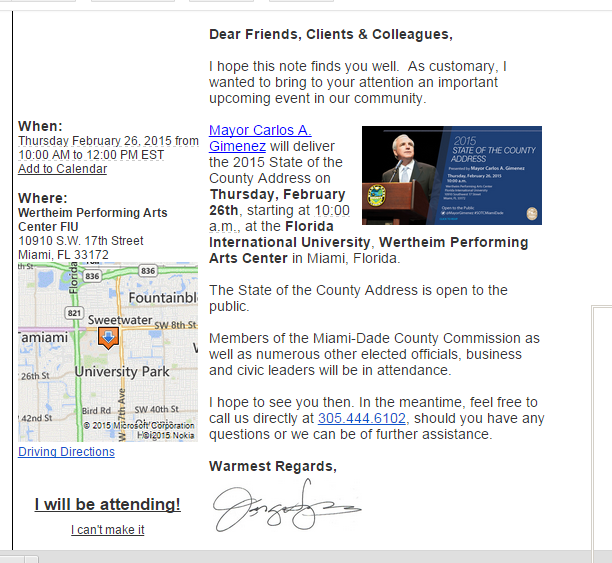 Gimenez, Lopez and their wives met the pope together in a 2013 trip to Rome. In October, Lopez tweeted a photo of him with the mayor in New York City. Both traveled there for a technology conference by IBM, a Lopez client and Miami-Dade vendor. IBM tapped Gimenez as a speaker. 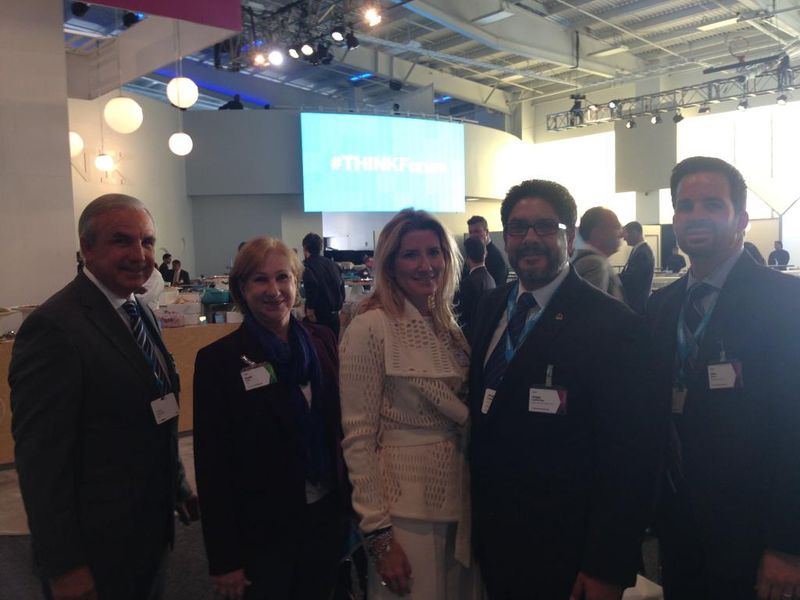 (Photo: Mayor Carlos Gimenez, far left, and lobbyist Jorge Luis Lopez, second from the right, pose in a photo Lopez circulated to his mailing list and Twitter followers. The photo is at the IBM Think Forum, held in October 2014 in New York. Lopez represents IBM in its pursuit and management of Miami-Dade contracts. At the center of the photo is Lopez's wife, Marile Lopez, who serves as CFO of the Jorge Luis Lopez Law Firm in Coral Gables, and far right is Gimenez's chief of staff, Alex Ferro. Second from the left is IBM executive Emily Loos.)

The photo memorializing Lopez’s exclusive time in Manhattan with the mayor captured the kind  of access that can translate into big bucks for lobbyists.

With a standing weekly appearance on Radio Mambí, one of the most active Twitter feeds in the local lobbying industry, and regular online surveys on County Hall issues, Lopez puts effort into maintaining a high-profile. His clients include the Miami Heat, Florida International University, Lyft and Florida Power and Light.

Lopez said the RSVP contretemps began Friday, when Hernandez sent him a text. Lopez provided images of parts of the exchange, which Hernandez did not dispute.

“Jorge, someone told me you have an RSVP for State of the County,” Hernández wrote. “I’m just pointing out that only the folks on the list the office of the mayor has will be honored.”

Lopez wrote back: “Cool.. For the past 9 years we’ve reminded people of SOC and provided the mayor’s office w list. We planned to do the same.”

Hernandez replied: “If you would have told me that, we would have done it. Give me your list. Thank you.”

An email provided by Hernández showed Lopez’s office on Monday sent over a list of about 30 people that had RSVP’d to Lopez’s invitation.

In his statement, Hernandez said only his communications team was authorized to invite people to State of the County. “This isn’t personal,” he said. “It’s protocol.”

The guest-list imbroglio also pulled the curtain back on the two categories of attendees for the mayor's signature address: people who just show up for the free event, and the VIPs who get invited.

Hernández released a series of email lists that the Mayor’s Office used to generate invitations for the 10 a.m. event. He said people who RSVP receive reserved seats. The lists include a predictable roster of local mayors, college presidents, union officials, and non-profit leaders, along with Gimenez’s campaign donors, political supporters and friends.

Lopez, a top local fund-raiser and early donor to Gimenez’s 2016 reelection campaign, was on the list.

Lopez, a lawyer, said he should be free to forward the invitation from the mayor’s invitation to others.  “I was invited by the Mayor's office via email to attend the 2015 SOC,” Lopez wrote in his statement. “[T]hat email did not state or suggest that the invitation was non-transferable, nor that it could not be forwarded or reproduced in anyway.”