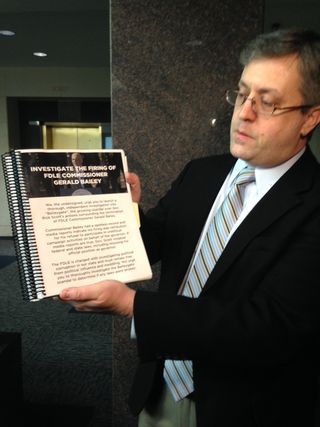 Petitions signed by more than 10,000 people were delivered Wednesday to the Tallahassee offices of State Attorney Willie Meggs and U.S. Attorney Patricia Marsh. The petitions, collected by Progress Florida, a liberal public advocacy group based in St. Petersburg, ask for investigations into Gov. Rick Scott's forced ouster two months ago of Gerald Bailey as the state's top law enforcement official.

Bailey has said Scott's lawyer gave him an ultimatum to "retire or resign," and after Scott told reporters Bailey "resigned," Bailey called Scott a liar and made numerous allegations of political interference in FDLE operations by Scott, his aides or his campaign.

Meggs declined to act on a citizen's complaint filed last month, asking him to open an investigation. Most of the state's news organizations have filed a lawsuit in circuit court, charging that Scott and the three elected Cabinet members violated the state open meetings law through private discussions that their staff members had in the weeks before Bailey was forced out.

Meggs said no violation of the open meetings law took place because Scott and the Cabinet never voted to fire Bailey. The four officials did vote to confirm Bailey's successor, Rick Swearingen, at a Cabinet meeting Jan. 13.