Swearingen got plum travel with governor, even after he left the security job 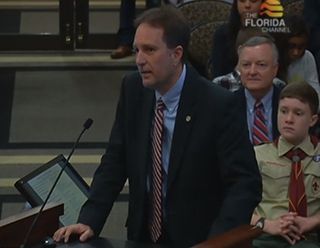 In his first two years in office, Gov. Rick Scott became so friendly with bodyguard Rick Swearingen, that when Swearingen’s duty ended as special agent in charge of protecting the governor, Scott kept him on for plum assignments — trips to Paris, Japan and the college football championship.

According to travel records released by the Florida Department of Law Enforcement, Swearingen held the unusual position of being both director of Capitol Police, in charge of security at the Capitol complex from May 2013 to December 2014, while also serving as the governor’s occasional bodyguard for long-distance travel.

Scott gave Swearingen a promotion in December. He forced FDLE Commissioner Gerald Bailey to retire or be fired, and unilaterally named Swearingen as Bailey’s successor as the state’s top law enforcement officer. The incident unleashed a firestorm of controversy when Bailey caught Scott falsely claiming that Bailey had “resigned” and Cabinet officials said they had been misled by Scott’s staff.

Swearingen, 55, a veteran FDLE agent, joined Scott’s protective operations team in September 2010. The duty of the security team is to protect Scott and his wife, Ann, wherever they go — a job that demands hours of intimate contact with the chief executive and his family. Scott, however, has gone to such lengths to shield the public from knowing where he travels and with whom that he has persuaded federal regulators to exempt his plane’s flight data from federal aviation logs.

After more than two years, Bailey named Swearingen director of Capitol Police but, less than a month after starting that job, Swearingen joined Scott on a week-long trip to France to attend the International Paris Air Show.

In November 2013, Swearingen traveled with Scott again, this time on a week-long trade mission to Tokyo. When they returned, the governor brought Swearingen with him again on a three-day trip to Biloxi, Mississippi, to attend the annual meeting of the Southeast U.S./Japan Association.

The long-distance assignments continued for Swearingen into the next year. When Swearingen’s college team, the Auburn Tigers, faced off against the Florida State Seminoles at the 2014 college football championship in Santa Clara, California, Swearingen went along for the three-day trip as Scott’s security detail. More here.